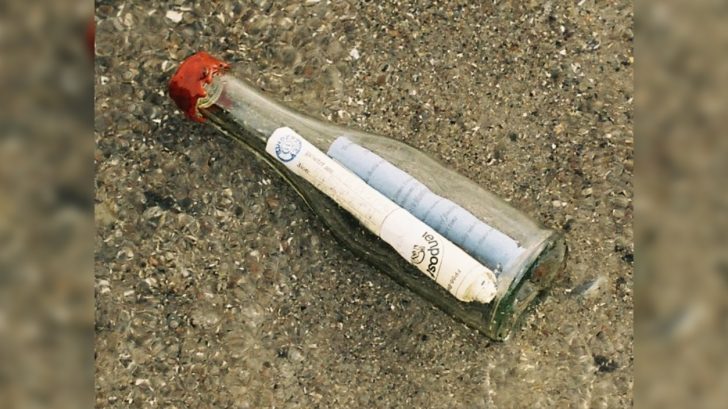 A letter in a bottle was released in the ocean 37 years ago and it was just found the other day 3,700 miles away from where it was originally let go.

According to Insider, the pieces of paper were placed in the bottled by Japanese high schoolers at Choshi High who were conducting an experiment from 1984 to 1985.

The goal was to study the oceans currents and 750 bottles were placed in the water off Miyakejima Island, an island near Tokyo.

Since the bottles have been released into the ocean, there have only been fifty of them found and reported back to the high school. In each bottle, students were instructed to write a message with contact details in multiple different languages.

Some of the bottles were found on Japan’s small islands while others were found in the Philippines, China, and along America’s west coast. The last time a bottle was found though was in 2002, on the southern Japanese island of Kikaijima.

“We thought the last one was found in Kikaijima. We never imagined another would be found 37 years on,” Choshi High School vice principal Jun Hayashi said, according to Insider.

A glass bottle containing a message from 1984 has washed up in Hawaii and been discovered by a 9-year-old girl — 37 years after high school students in Japan dropped it into the ocean as part of an experiment. https://t.co/P9fJA1GUrY

Now almost 20 years later, 9-year-old Abbie Graham found the latest bottle on the beach while she was at Paradise Park. She said when she saw the contact info she immediately contacted the high school to inform them. She then mailed the letters and a picture of herself and her sister eating sushi to the school.

“I want to go look to find another one,” Abbie said.

A 54-year-old member of Choshi High’s 1984 science club said the find hit the high school like a wave of nostalgia. She thanked Abbie for finding the bottle almost four decades after it was released.

“I was surprised, it revived nostalgic memories of my high school days,” she told The Mainichi Shimbun.