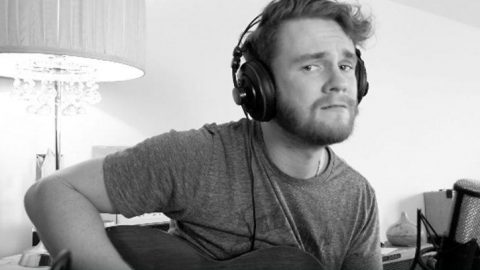 Son of country music legend Merle Haggard, the one and only Ben Haggard, shared a bit of his heavenly gift by gracing fans with a breathtaking performance of the popular hymn “Amazing Grace.”

Maintaining a simple yet chilling approach to this stellar rendition, Ben had viewers on the brink of tears and on the edge of their seats. Shooting his performance in a subtle black and white filter, Ben captivated viewers with his incredible talent.

Ben’s voice has a striking comparison to his father’s, echoing the same unforgettable tone that gifted country music with many timeless classics. He dove straight into his performance showcasing his impeccable vocals and musical elegance.

The singer’s change in pace resonated with viewers, clinging to Ben’s outlaw sound and raw emotion that pierced the hearts of fans. As he continued his performance, praise poured in with uplifting comments both dedicated to the singer and his influential father. Finding the eerie similarities in their voices, fans glorified Ben for continuing to keep his father’s spirit and legacy alive and well through his work.

Be sure to check out Ben’s phenomenal performance below.