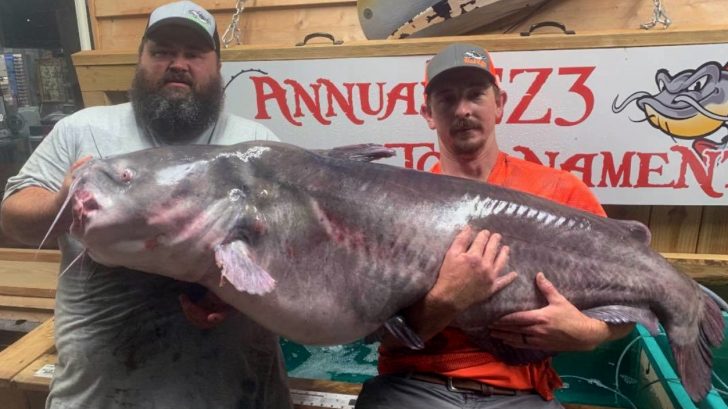 Rocky shared a photo on Facebook and said, “After a very long night. Justin Ryan Clifton and myself just had the new state record blue certified at 127.1lbs. Thank you to everyone that came out and helped us with this. It will be a night to remember for ever!”

The men caught the fish at Roanoke River and took it back to E-Z Bait and Tackle in Goldsboro where the tackle shop filmed a live video on Facebook interviewing the men.

They kept the fish in a special tank to keep it alive while they waited for a wildlife official to get there and certify the catch.

They filmed another video once the wildlife official got there. It showed both Rocky and Justin lifting the fish out of the water tank and placing it in a yeti cooler to then put onto the scales and weigh it.

After it was weighed, Rocky and Justin drove it back to the Roanoke River where they safely released it back into the water so that it could finish its life in its natural habitat. The said the fish proudly swam away back into the river.

“These two catfish anglers, The Crew at EZ Tackle, the community of catfish anglers surrounding this sport, local law enforcement, and wildlife biologist Ben Ricks – took all the precautions able to assure it’s healthy release and we hope that this monster continues to grow and prosper in the waters of our amazing state!” E-Z Bait and Tackle wrote on Facebook.

Watch Footage Of The Catfish Below