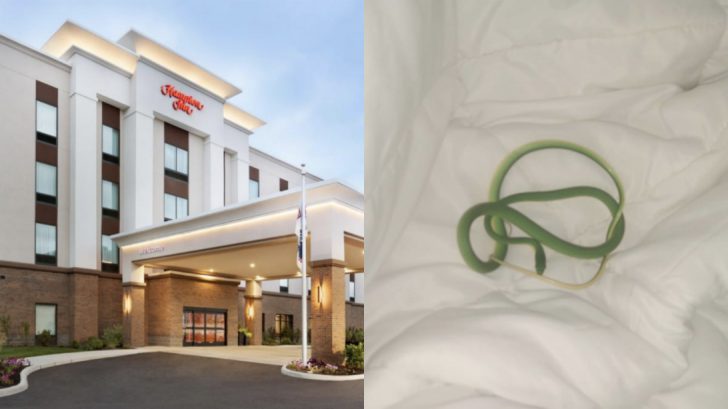 Getting a good night’s sleep in a strange bed is hard to do. But, throw a sneaky, slithering reptile into the mix and it makes for a nightmare that won’t be easily forgotten.

Weary traveler, Melinda Major, stopped at a Hampton Inn in Memphis, Tennessee on July 2019. But, a good night’s rest is the last thing she got. Major shared in a Facebook post that she got a rude awakening when she awoke after feeling something on her arm. Her first thought was that it was her husband “trying to snuggle.” But, she quickly remembered that her husband hadn’t traveled with her.

She looked over to find a grass snake stretched out across her arm. “I freaking flipped out! Talk about my ninja skills coming out…I threw that sucker across the bed against the headboard and stayed on top of the desk until the manager got there to get it!” Major wrote.

Yeah, this happened today! I'm in Memphis for an appt and wake up in my hotel room feeling something on my arm…I first…

In replies to friends’ comments, Major admitted that she was still shaken up by the incident.

Hear Melinda Major relive the incident in an interview with a Memphis news station in the video below.

Woman wakes up to find snake resting on her in East Memphis hotel.