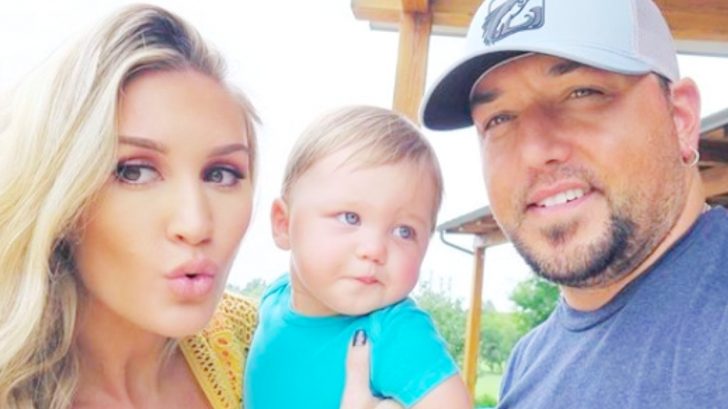 We know it may be hard for y’all to believe, but Jason and Brittany Aldean‘s son Memphis is now a year old!

In a year when it seemed like a country star was having a baby or announcing a pregnancy every other day, the Aldeans’ pregnancy announcement was arguably one of the biggest.

They revealed the big news in May 2017, with Brittany writing, “We will never take one moment for granted & can’t wait to meet you, sweet baby.”

SURPRISE!!! WE ARE PREGNANT!!! This was the hardest secret we've ever had to keep ? This journey for us has been full of many happy times & also many tears… The biggest rollercoaster we have ever been on, without a doubt! All of the moments of heartache were followed by the biggest blessing in the entire world!! We will never take one moment for granted & can't wait to meet you, sweet baby!!! ???

Seven months later, they got to meet their sweet baby boy on December 1, 2017. Sharing a photo from shortly after his birth, Brittany said that it was “hands down” the best day of her life.

“There truly are no words for the love we feel,” she wrote.

Memphis Aldean Williams? Born today at 1:29PM weighing 9lbs 5oz ??? There are truly no words for the love we feel?? Thanks for the amazing support @jasonaldean and enduring all the hand squeezing and nail digging? … HANDS DOWN THE HAPPIEST DAY OF MY LIFE!!!

Gaining Another Sister – And Soon

Memphis joined big sisters Keeley and Kendyl from Jason’s previous marriage, who dote on him as the baby of the family. But he isn’t going to be the baby for long, as Jason and Brittany are already expecting a second child together.

Wanting their children to be close in age, the couple planned to get pregnant again before Memphis turned one. In July 2018, when Memphis was only seven months old, the Aldeans revealed their second pregnancy in the sweetest way ever…by having their son announce the news.

Jason and Brittany eventually revealed they are expecting a girl this time around, and that her name will be Navy Rome. Looks like Memphis is going to be outnumbered by all of his sisters!

Even though the couple is busy gearing up for the upcoming arrival of their daughter, they threw everything aside to make Memphis’ first birthday a special one.

They each shared some precious photos of the celebration on social media, with Jason posting a celebratory photo of his little man wearing his divided Georgia/Alabama jersey (dad is a Bulldogs fan while mama loves the Crimson Tide).

Happy 1st Birthday to my main man today. What a blessing you have been to our family. We love u so much Mems!????#goldenbirthday #memphis

There’s a reason why Memphis was all decked out in sports gear for his first birthday. It just so happened that it was the day of the SEC Championship game, and his parents’ favorite teams were playing against each other.

“What are the odds…” Britany wrote, along with a sweet snapshot of her, Jason, and Memphis.

What are the odds your Birthday is on the same day as the SEC Championship and Bama is playing Georgia? Send mama some good vibes baby!!! ROLL TIDE?

Brittany also celebrated her son’s birthday with another precious photo, with this one showing how he reacted to his first birthday cake.

Decorated to resemble a baseball, it looks like Memphis went to town on the sweet treat. His hands and face were covered in icing!

He looks pleased with himself, doesn’t he?

Happy 1st Birthday to the light of my life? Your daddy always told me you’d rock my world and boy was he right. I have never met a sweeter, more loving baby and I feel so blessed to call you mine☺️ I have so many mixed emotions today! I love to watch you grow but wish I could bottle up this time and save it forever? You’ll always be my baby. I LOVE YOU SO MUCH??

It’s been so much fun to watch Memphis grow and learn over the past year. Happy birthday little guy!