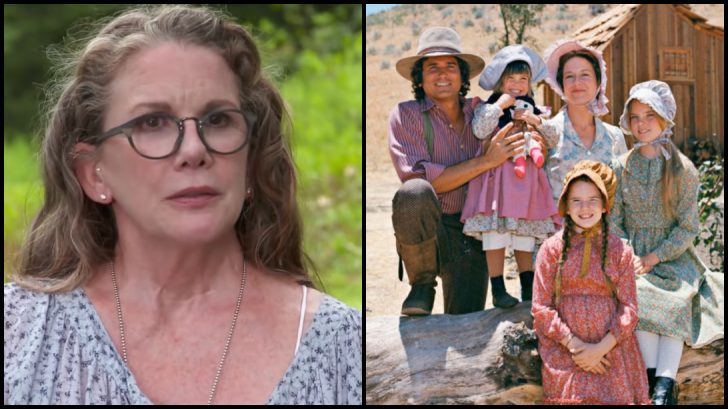 Melissa Gilbert starred in “Little House on the Prairie” for nine years in the role of Laura Ingalls. She looks back on those years fondly, but recalls one heartbreaking episode that she can’t bring herself to watch.

Gilbert was only 10-years-old when she earned the lead role in Little House on the Prairie. The show’s first season told the story of the real-life Ingalls’ family’s move to Walnut Grove, Minnesota, the Ingalls’ girls’ first day of school, the trials of Pa Ingalls’ life as a farmer, and the introduction of family friend Mr. Edwards.

But, there was one episode in particular that was an emotional one to film, and still emotional to watch for Melissa Gilbert. Int he two-part episode “The Lord Is My Shepherd,” Ma and Pa Ingalls welcome their first son, causing Gilbert’s character, Laura, to become jealous and resent the attention the baby gets from her Pa.

The baby gets sick and dies causing Laura to be overcome with guilt. Laura seeks advice from Reverend Alden who encourages her to draw close to God, advice that Laura took literally. As a result, Laura ran away to the mountains where she felt like she would be closest to God. While on the mountain, she meets and becomes friends with an older man named Jonathan (played by Ernest Borgnine).

In My Prairie Cookbook, Gilbert wrote about the episode, saying: “This is one of the stronger, if not the strongest, episodes we ever did. Michael Landon’s writing was perfect. Although it’s full of important themes about faith and forgiveness, the show is written from a child’s perspective. The fact that Laura literally takes Reverend Alden’s advice – ‘The closer you are to God, the more likely He is to listen’ – shows how forceful a simple message can be.”

Most of the scenes in that episode were between Gilbert, her on-screeen father Michael Landon, acting legend Ernest Borgnine, and Victor French who played family friend Isaiah Edwards. The impact of sharing the screen with these men made for a powerful moment for Gilbert.

“For me personally, this episode was an absolute joy,” Gilbert said. “Working with Ernest Borgnine, Mike, and Victor on location in Sonora, California, was like a dream come true.”

Off screen, Gilbert was extremely close to Michael Landon, a bond that was obvious during their Little House scenes together, which made filming this particular episode emotional for the pair.

“The climactic scene where Pa and Laura are reunited on Jonathan’s mountain is the quintessential example of my relationship with Mike,” Gilbert wrote. “The tears were mutual and real – the love between us is clear and obvious. This is the one I just can’t bring myself to watch.”