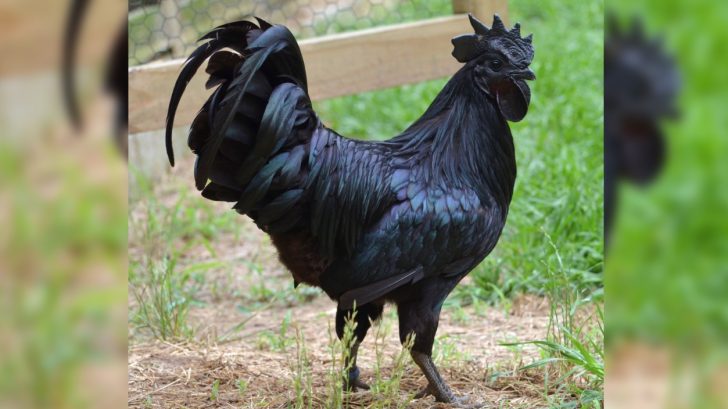 Known as the “Lamborghini of poultry,” the Ayan Cemani is one of the most unique chickens in the world. They are black from the tip of their feathers to the core of their bones.

These exotic animals are indigenous to Indonesia and one place an American can purchase one is from Paul Bradshaw, the owner of Greenfire Farms located in Havana, Florida.

An egg costs $199 or $400 for a mother chicken that can lay 60 to 100 eggs per year. Paul has a good reputation for breeding happy and healthy Ayam Cemanis and he says the chickens get their blackness from their genetics.

“The source of all this blackness is a gene mutation that emerged in Asia centuries ago and eventually made its way to Europe,” Paul said, according My Positive Outlooks. “The mutation produces about ten times as much melanin as you’ll find in a normal chicken.”

For hundreds of years, these black beauties have been regarded as spiritual creatures. In the past, they were only kept by the elite or used in sacred rituals in the Indonesian island of Java.

Ph.D. in the anthropology department at Harvard University, Veronika Kusumaryati explained that traditional Javanese culture says, “the world is occupied by spirits, good and bad, whose power can be mobilized to help people to gain power, reputation, and wealth. For these purposes, one should offer Cemani chicken, as the ghost and spirits love Cemani chicken’s meat and blood.”

Watch Footage Of The Black Chicken Below