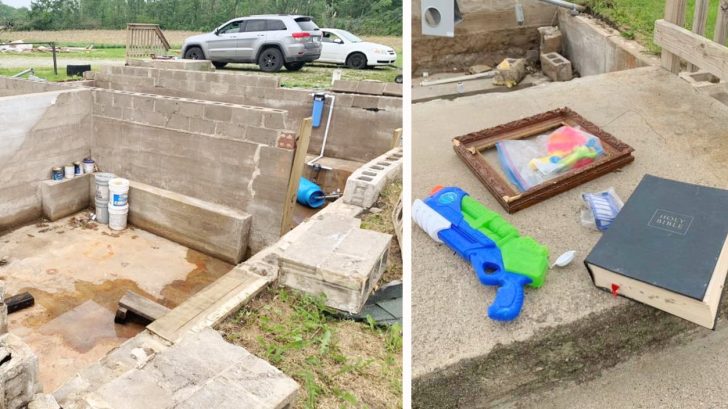 Over the spring, tornadoes tore through multiple states in the U.S., leaving immense damage in their wake. Just a few of the states affected by the terrible storms include Ohio, Iowa, and Illinois.

Indiana is yet another state affected by the storms. According to a report published on May 29 by usnews.com, which cites the National Weather Service, eight tornadoes have touched down in Indiana over the course of 48 hours.

One of the tornadoes that touched down was classified as an EF-2 level tornado. That means that the storm was capable of creating “considerable damage” and had winds between 111-135 mph.

For reference, an EF-5 level tornado is the most devastating, and can cause “incredible damage” and create winds in excess of 200 mph.

The EF-2 tornado and others that ripped through Indiana certainly lived up to expectations when it came to the amount of damage they caused.

Here’s video of storm damage in Pendleton, Indiana. @MadisonCoEMA says area is under Tornado Watch until 12AM. Most roads in town are closed. (?: Luke Renner) #pendletoninstorm pic.twitter.com/L7MVMv7xnL

In one family’s case, their entire home was left in ruins after the tornado touched down in their area. Thankfully, the family wasn’t home at the time, since they were on vacation in Florida celebrating the Memorial Day weekend.

Nancy Sander, the sister of the homeowner, spoke to WTHR News about the damage the tornado caused. The home was blown completely off its foundation, and Sander described how parts of it and its contents were blown over half a mile away.

Needless to say, she is thankful that her sister was not home at the time.

“She loved this place and the things, but had they been in the basement, they would have been sucked right out,” Sander said.

These pics are from Miami County where two houses along with several barns and out buildings were leveled by a tornado. Lots of damage but no one hurt

But even though the family home was left in ruins, a bit of hope emerged from the rubble.

A few of the family’s belongings were found intact, including a quilt that was found in the woods and red wagon that was parked in the swamp near the house. On the porch, the family also found a few toys, a picture frame, and their Bible.

Miraculously, the Bible appeared to be untouched by the storm, and was found resting face up next to the toys and busted picture frame. Behind it, you can see the destroyed house in the background.

Outside of the small Miami County town of Macy Indiana, this house was blown off the foundation into the surrounding fields. Fortunately the owners had just left for Florida. Their Holy Bible remains sitting next to where the house once stood. @WTHRcom pic.twitter.com/fNdeFT1unM

How incredible is that? After all the destruction the tornado caused, the family’s Bible was one of the only things it did not destroy or send flying half a mile down the road.

Our prayers go out to the family whose home was destroyed, and to all who have been affected by these terrible storms. You can learn more about the devastation that has been caused by the storms by watching the report below.

Stories like this one about Sander’s sister’s Bible go to show that even in the darkest of times, there is always a bit of hope to be found…