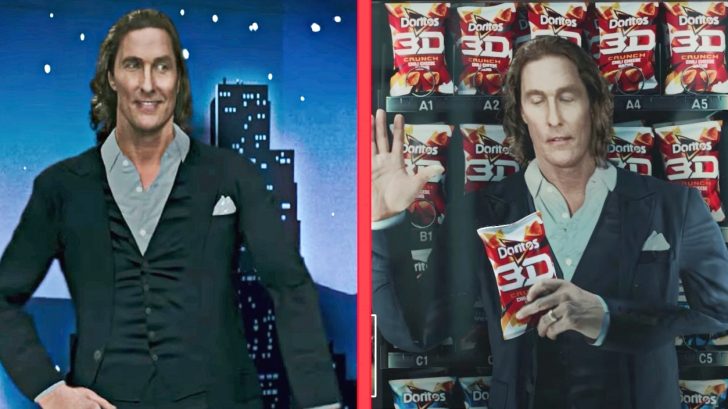 Fans will see a new 2-dimensional side of Matthew McConaughey on Super Bowl Sunday.

Every year, Doritos brings new and exciting elements to their Super Bowl commercials, and this year is no exception. Good Morning America received an exclusive look at the brand’s commercial for Super Bowl LV, which features a paper-thin version of McConaughey to promote Doritos 3D.

In the two-minute spot, “Flat Matthew” struggles to perform daily activities while in his paper-doll-like state. The actor gets caught in a vacuum cleaner and even accidentally turns into a kite. Finally, McConaughey climbs into a snack machine and eats a Doritos 3D, which is the cure to his condition. McConaughey inflates back to his original state while hilariously trapped inside the machine.

Mindy Kaling and Jimmy Kimmel also appear in the commercial. The two stars both appear to be startled by the actor’s appearance, which further adds to the commercials humorous storyline.

Additionally, Official Frito Lay brought back Super Bowl football legends for their ad “‘Twas the Night Before Super Bowl,” which showcases several of their chip varieties, including Doritos. Check out the full video below!