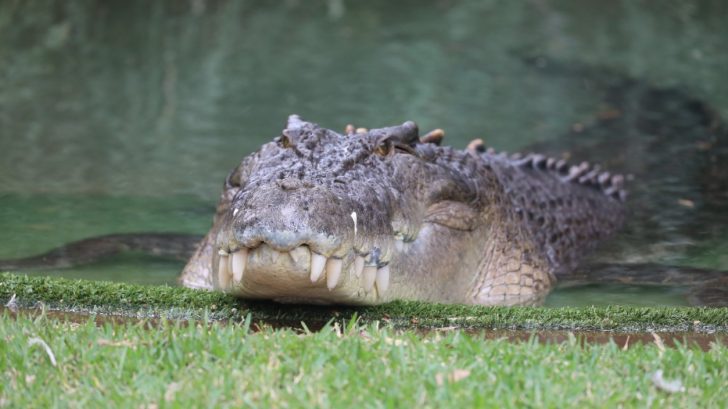 Located on Australia’s Central Coast in Somersby there’s an alligator lagoon in the Australian Reptile Park with a lot of male alligators waking up from hibernation, flexing, and sounding like a pack of lawnmowers.

A video was shared on YouTube showing the massive 1,000-pound creatures growling and grunting as zookeepers filmed them in the water.

They say the alligators are performing their mating call to try to attract a female and with multiple of them calling at the same time, it can surely sound very similar to a lot of lawnmowers trying to start around the park.

Fortunately, all the new males were added to the group at the beginning of winter in Australia when they are typically less active and there’s a lower chance of conflict. The zookeepers said because the new arrivals were settled in well, there’s less of a chance they would fight and seriously injure one another.

“Having 20 new males join our mostly female population in May has had a huge impact on the behavior that we normally see this time of year,” a reptile keeper at the park Jake Meney said, according to WPDE. “The sound of a male bellowing signals the start of breeding season, and we expect it as the weather warms up. But what we heard this morning was unlike anything else I’ve ever heard. The new males are certainly keen to make themselves known.”

While things heat up in the alligator lagoon, for now, they say in Australia’s summer they should expect to see nests with little baby alligators inside them. In total, the park currently has 55 American alligators which is the largest population of gators in a zoo in the country.

“High-octane alligator feeding shows are one of the highlights for visitors to the Central Coast-based wildlife park,” the park states.

The procedure the zookeepers follow for releasing new gators into the park is extremely dangerous. The gators are up to 12 feet long and can weigh up to 1,000 pounds. When a new male is released into the park each time, they hope that the gator runs for the water and doesn’t turn around and attack them.

See More Footage Of The Gator’s Below