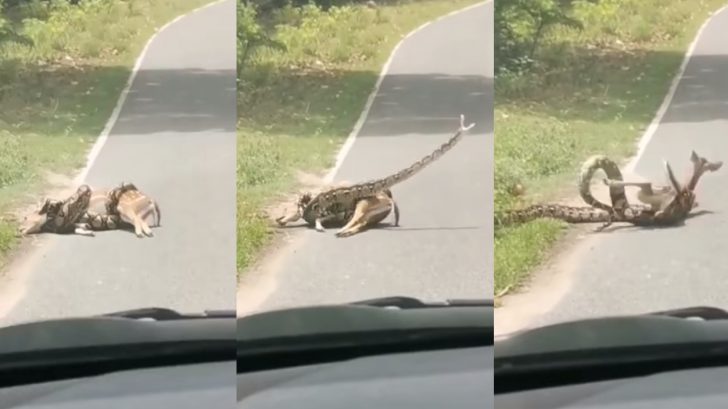 Video footage allegedly coming out of South Africa shows the shocking moment a baby deer was saved from a massive snake squeezing it to death in the middle of a road.

Russ Sydenham from Hanging Rock, New South Wales was said to have been visiting South Africa when he filmed one of the most shocking encounters of wildlife doing what it naturally does best.

In the video, Russ was sitting in a vehicle pulled over to the side of the road due to there being a massive eight-foot python wrapped around a fawn, trying to constrict the deer to death.

Honestly, it looked like it was over for the fawn because it wasn’t moving and appeared to be completely out of breath laying there on the road. However, all was not lost.

Someone got out of the vehicle and went to the side of the road to break off a tree branch and then proceeded to walk over to the snake and hit it with the branch.

The snake quickly went on the offense and started striking back at the person who was hitting them with the branch.

However, it soon realized it was no match for the branch-wielding opponent and released its grip on the fawn and quickly slithered back into the roadside bushes.

The baby deer took a big breath and scrambled to get back up to its feet but then took off running as fast as it could back into the forest.

Russ later posted the video to Facebook where it received thousands of comments from people having mixed emotions about the fawn being rescued.

Seth Bartlett commented, “Why interfere? The snake only eats something like that every few months.”

Jason Hendricks said, “This person is an idiot, the snake needs to eat too.”

Shera Grant said, “Good job u save a life.”

Elize O Reilly commented, “That was good help, thank you who ever you are.”

Anrika Kuit reacted, “Not in SA!! And that is animal abuse!! Why don’t they just leave nature to do its cause.”

Kyle J. Moses wrote, “Who died and made you God? This is just Mother Nature taking its course.”

Watch The Fawn Vs Python Footage Below