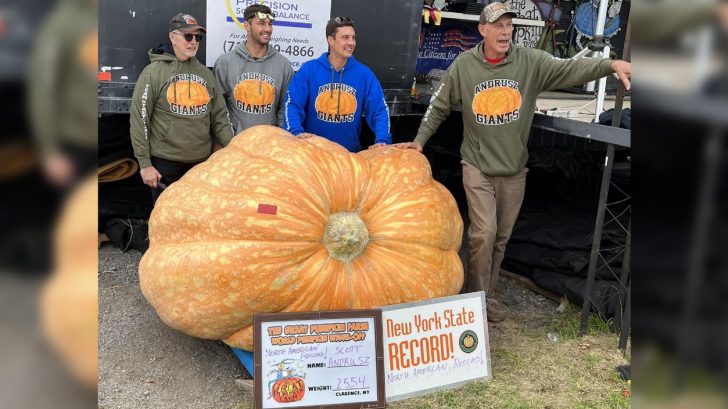 Scott Andrusz of Williamsville just made major headlines for the 2,554-pound pumpkin he grew in upstate New York that is now being entered into the record books for being the heaviest pumpkin that has ever been recorded being grown in the United States.

His pumpkin was officially weighed at the Clarence Farm and is said to be on display at the Great Pumpkin Farm until October 16.

The Great Pumpkin Farm has many fun activities like amusement rides, hayrides, a corn maze, a shooting gallery, Halloween decorations, and delicious foods to eat. There are also pumpkin and apple picking patches.

It’s said that the first pumpkin to break the 1,000-pound mark was a 1,061-pound pumpkin recorded as being the heaviest pumpkin in the world during the 1996 annual fall festival.

That pumpkin held the Guinness World Record all the way until 2021 when a farmer from Italy, Stefano Cutrupi, grew a 2,702-pounder, smashing the previous record.

“In my head, I was reliving the whole journey to get to that moment,” Stefano told Guinness World Record. “All the time dedicated to cultivation, to the search for new ideas, the time spent comparing myself with other growers, my sacrifices, and the sacrifices of those closest to me… there were good moments but I also had to swallow bitter pills.”

Stefano presented the super-sized squash at the 10th edition of the Campionato Della Zuccone pumpkin festival in Peccioli on September 26, 2021. He says he can remember at the time right before his pumpkin was being officially weighed and all eyes were on him.

“At the time of the weigh-in, I had my back to the screen. When my friends and the audience saw the weight, they swept me up in celebration. At that moment I knew I had made it. I screamed until I lost my voice,” Stefano recalled.

Stefano noted that he not only won the top spot at the contest, but his pumpkins always claimed second and third place.