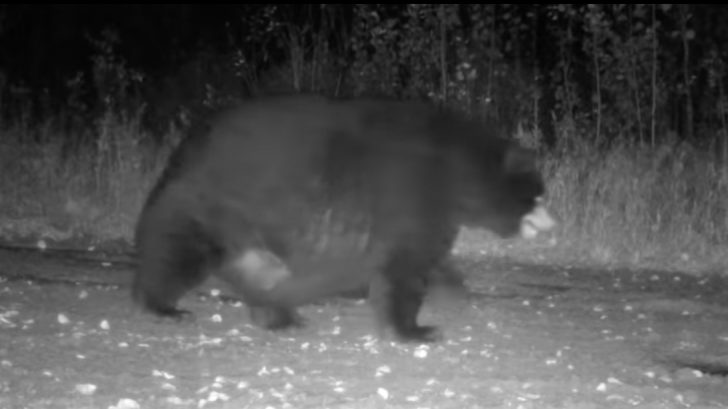 A chubby black bear in Minnesota is putting Winnie the Pooh to shame. The bear was spotted on a trail cam in Voyageurs National Park near the U.S.-Canada border and viewers can’t get over the size of the beast.

A 10-second clip posted to Facebook by the Voyageurs Wolf Project shows the “porker” waddling slowly in front of the camera, giving viewers a good look at the size of its belly as it appears to drag the ground.

“This might be THE fattest bear we have ever seen in our area!” the Facebook post reads. “Unfortunately, we only got one video of this beauty but it is enough to appreciate the bear’s curves and figure…it worked hard for that body!”

Commenters were quick to suggest that the bear may be as big as Alaskan grizzlies who can get three times larger than a black bear. Others suggested that it may be a pregnant female, but black bears don’t give birth until January when the mother bear is hibernating.

One concerned commenter asked if the bear was okay. They were assured that the bear was just find. “Bears in northern MN try to gain 30-50% of their weight since they hibernate and may not eat for 6-7 months. I suspect he’s actually a bear from my sanctuary in Orr and managed to find additional food sources after we closed for the season,” Steph Horner, director at Vince Shute Wildlife Sanctuary wrote.

Others insisted that the bear is pregnant, most likely with more than one cub. Yet, some are happy to know that the bear will have a cozy, restful hibernation. See the clip of the fat bear in the video below.