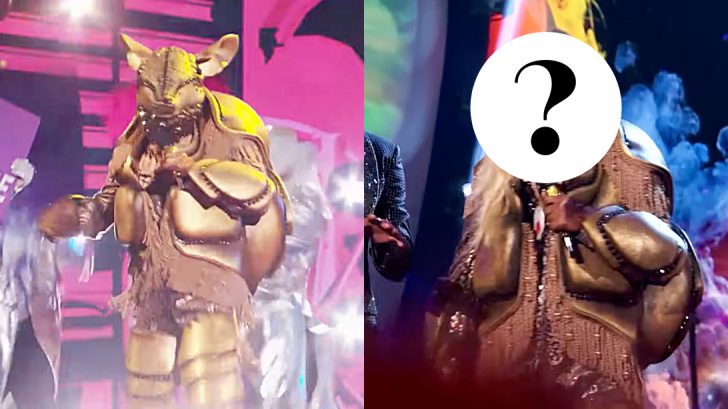 In a dramatic double elimination Wednesday night on the The Masked Singer, one of America’s most famous bounty hunters was revealed as the voice behind the Armadillo mask.

After singing a tear-jerking rendition of “Amazing Grace,” the Armadillo was eliminated and revealed to be none other than Duane Chapman, aka Dog the Bounty Hunter. Following his elimination, Chapman told host Nick Cannon that he saw the show’s first season and was drawn in by how much fun they were having.

“I was like, man, they are having fun,” Dog admitted. “Then, when I got here they said, ‘You gotta sing,’ I’m like, ‘What?’ Sing? I don’t even sing in the shower.” Dog said he tried to throw the judging panel off with his clue involving a bow and arrow, saying, “I am half Apache.”

Numerous hints found in Armadillo’s clue package indicated Dog the Bounty Hunter was the famous voice behind the mask. A dog leash pointed to his television show “Dog Unleashed.” A pair of sunglasses were a nod to Chapman’s famous look. Hot dogs, a fugitive bus, a motorcycle and big rocks were indicators of his name, his home town and his past.

“We, the team and FOX, tried to throw in the songs, in the interview, I presented the shaka — it’s called ‘throw a shaka’ — four or five times. We tried to really load up the detectives and the judges with more info than they’ve ever received,” Dog told HollywoodLife following his elimination. “It’s one of the first times where I got to lay down the clues instead of finding them because that’s what I do, right? And I was like, ‘Oh, I could get away from anybody. This is so much fun.’ I was amazed that I went as long as I did without getting number one, booted, and number two, guessed.”

Despite the vague clues, two of the judges discovered Chapman’s true identity. Jenny McCarthy and Nicole Scherzinger both guessed that Dog was the singing Armadillo.

Dog, who is best known for tracking down fugitives, said that The Masked Singer was a huge challenge for him. “You can’t see. You can’t walk.” The costume was a “foot taller” than 5’7″ Dog is in real life. “So you’re actually talking around the neck, but you’ve got to act like you’re not. You cannot see. No one can. You’ve got to go out there blindfolded and depend on God and your hidden talent.”

Watch Dog the Bounty Hunter’s big reveal in the clip below.