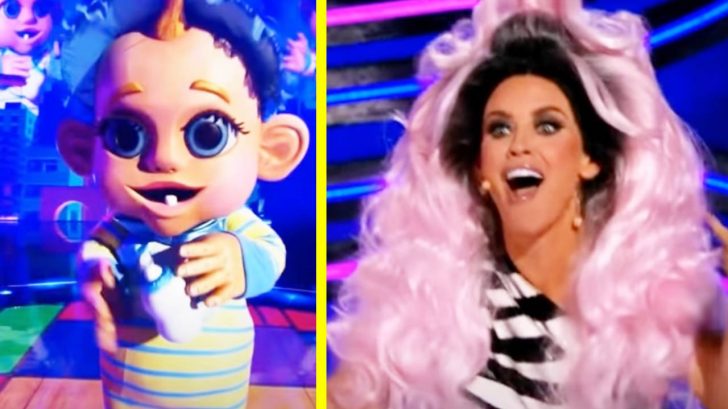 On Wednesday night (Oct 6), the third episode aired which featured performances fro Bull, Hamster, Skunk, Baby, and Pepper. It was the second performance for four of the singers. After all the performances, it s revealed that Baby was eliminated. But first, let’s watch his two performances!

He kicked off the season with a performance of “You’re the First, the Last, My Everything” by Barry White. He started the song by talking a little bit and his voice was disguised so the judges couldn’t figure out who he was, but once he started singing, they were completely shocked! Jenny McCarthy Wahlberg jumped out of her seat in surprise. Some of the judges’ guesses were Vin Diesel, Will Smith, and Chuck Norris.

Baby made it through to the next round, where he sang an interesting version of “Meet The Flintstones!”

This time, the judges guessed he could be John Travolta, Bruce Willis, Rod Stewart, Keith Richards, Gordon Ramsey. But, none of them would be correct and it actually stunned them…it was Larry the Cable Guy!

McCarthy Wahlberg was the most surprised because she even co-starred in a movie with the comedian called Witless Protection.

Host Nick Cannon called him “one of the most recognizable voices of our generation,” but that’s when he is using his fake southern accent! It’s hard to tell who he is when he’s not sounding like Mater from Cars!

Watch his big reveal below!