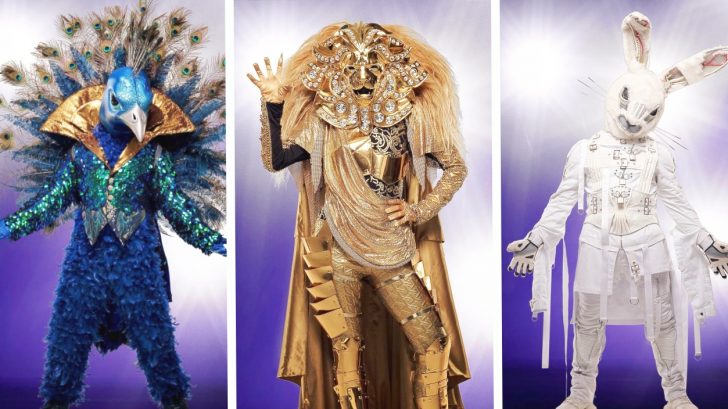 In the sea of competition shows on television, a program has to do a lot to stand out. That’s exactly what one new series has done, and it has taken the country by storm.

Called The Masked Singer, the new show is based on a popular program in Korea titled King Of Mask Singer.

The premise of the series is this: famous celebrities dress up in elaborate costumes and perform in front of a panel of judges. With nothing but the person’s voice (which may be disguised as well), body language, and a few hints to go off of, the judges and viewers have to try and figure out who is behind the mask.

Brush up on your detective skills! ? Use all the clues to guess who the celebrities are behind the masks TONIGHT at 9/8c on @foxtv. #TheMaskedSinger

During each episode, a number of contestants compete for votes from the judges and studio audience. Whoever has the least votes at the end is eliminated, and then unmasked, finally revealing their identity.

But here’s the catch, not every singer on The Masked Singer is actually a singer! So far, the eliminated acts have included two comedians and two NFL players.

The identities of eight contestants are still in question, but fans think they have a pretty good idea who’s behind some of the show’s more popular costumes.

Is A Country Superstar Making A “Roar” On Series?

For example, early on in the series people were certain that Carrie Underwood was the voice behind the powerful Lion.

Some promising evidence included the fact that the Lion costume’s designer was a big fan of Underwood’s and that the costume was made with a wrap across the stomach (Underwood would have been pregnant at the time of filming).

However, other early hints such as the fact that the Lion is “Hollywood royalty” and doesn’t yet have a gold or platinum record debunked the theory that Underwood was behind the lion’s mask.

@themaskedsingerlion's performance was MIGHTY! ? Can you guess who she is? ⁣ ⁣ Head to the ? in bio to hear her roar. #LionMask #TheMaskedSinger

On the other hand, fans’ suspicions about another popular creature on the show were basically confirmed when his sister spilled the beans during a televised interview!

From the get-go, fans have speculated that Donny Osmond is the showman behind the energetic Peacock. All the hints point to it being him: he started performing at a young age, was a heartthrob, and was friends with Michael Jackson.

Not to mention, every time the Peacock takes to the stage he puts on one stellar show!

When Donny’s sister, Marie, was being interviewed by Access Live, the hosts started prodding to see if she’d drop any hints about Donny being the Peacock. She didn’t only drop hints, she more or less confirmed that he is, indeed, the person behind the colorful bird’s mask.

“I told him, I said ‘Why are you giving away such easy clues?'” she said, before quickly trying to cover her tracks by saying she wasn’t sure if he was the Peacock or not.

What About The Rabbit?

As for another popular creature on the show, the Rabbit, many fans have been certain from the start that the person behind the mask is actor and New Kids on the Block singer Donnie Wahlberg. The theory seemed all the more likely since his wife, Jenny McCarthy, is actually one of the judges on the show.

Even McCarthy herself said she was convinced early on that her husband was behind the Rabbit’s mask. When asked by TODAY host Jenna Bush Hager if she thought her husband was a creature on the show, she said, “Yeah! The Rabbit.”

Let #RabbitMask reel you in. ? Hop over to the ? in bio to see him on #TheMaskedSinger stage.

The fact that the Rabbit was in a boy band is what made McCarthy think he could possibly be her husband. However, she just debunked that popular theory, as she did a little snooping to uncover the Rabbit’s identity.

She said that while the Rabbit was performing, she tried to FaceTime Wahlberg. If he didn’t answer, she knew that was a good sign he was the man behind the Rabbit. However, her theory, and many fans’, went out the window with that call.

“He would answer when the Rabbit was on stage,” she confessed.

Wahlberg’s Connection To Another Suspected Contestant

So there you have it folks, it turns out that Wahlberg isn’t the person behind the Rabbit’s mask! Well, then who is? Many others believe it could be a member of NSYNC, so stay tuned to the show to see if they’re right.

Interestingly, Wahlberg once shared the stage with another suspected Masked Singer artist…Carrie Underwood! Underwood joined New Kids on the Block during a Nashville concert for a surprise “Happy Birthday” serenade to two of its members. It turns out she’s a huge fan of the the group, and has been forever!

You can check out that performance below.

Now that you know that Wahlberg and Underwood are not the Rabbit and Lion on the Masked Singer, do you have any thoughts on who is? We’d love to hear your theories!