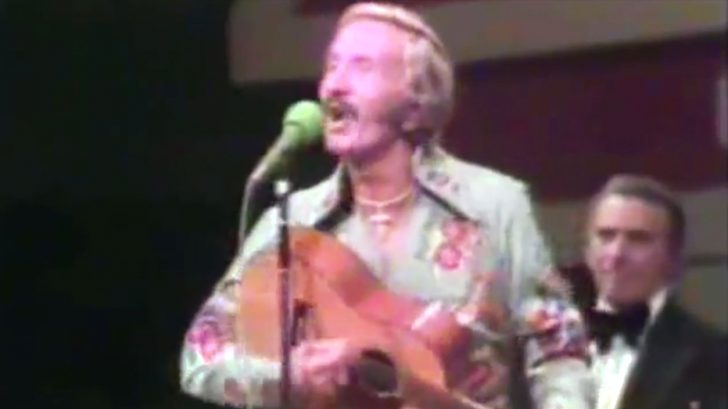 World-renowned Marty Robbins took the country-western world by storm during his almost four-decade career. His tunes topped country music charts and even made their way to some pop charts as well. Although being known for many occupations such as NASCAR driver, songwriter, and actor he is famously remembered as a singer.

Another singer that took the country world on a joyride was Elvis Presley. The heartthrob had his fair share of hit songs including “Burning Love” and “Jailhouse Rock.” One of Presley’s tunes from the fifties didn’t reach national fame but Robbins saw something special in it. “That’s All Right, Mama” tells the story of taking advice when your mama knows someone isn’t good for you. The relatable tune didn’t break the charts but its story was remembered.

Robbins’ performance began with his introduction to the audience of the classic song. In a full olive green and flowered jumpsuit with guitar in hand, the singer presented the reason why he was going to be singing “That’s Alright Mama.” Live at the Grand Ole Opry, he tells the story,

“Alright here’s a song that I did back when I was just a little kid in the 50s. This is when country music, you know, wasn’t as big as it is now. The thing that was really going big was rock and roll and I did some rock and roll numbers.”

I remember this night very well. As a young boy, I was fascinated with this man and his music. I was in Little Nashville, IN with my grandparents to see his show. He was so kind and waited for me to run back to my seat to change my camera. By the time I returned, Marty had changed from his jeans to his stage clothes. Such a fun time. Yes, I definitely was country when country wasn’t cool. I’m 49 years old now, and still play his music. @officialmartyrobbins #countryboy #countrymusic #cma #musiccity #nashville #countrylegend #elpaso #martyrobbins #cmtv #country #grandoleopry #rymanauditorium

After his speech, he instructed his band to start playing as he joined in unison. Robbins’ incredible on-stage persona made the performance even more entertaining. The jazzy tune had the crowd dancing the whole time. The instrumental solo lead the singer through the bridge of the song as he bopped around. An echo of claps filled the Opry after the performance!