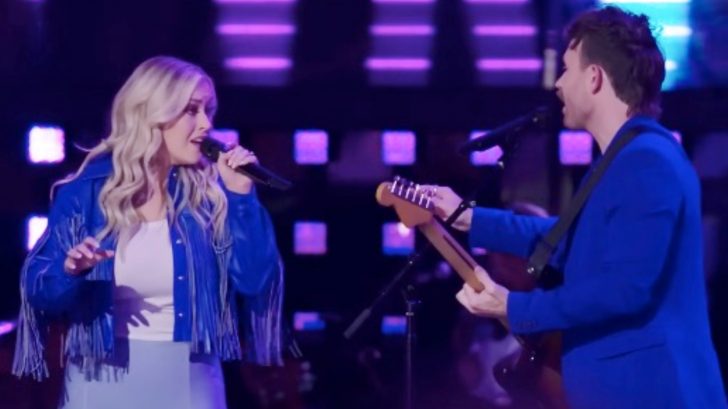 Husband and wife Derek and Katelyn Drye form the country music duo The Dryes. The couple auditioned for Season 22 of The Voice with a performance of Dolly Parton and Kenny Rogers‘ “Islands in the Stream.”

Blake Shelton was the first coach to turn a chair for them, which he did right after Katelyn joined in and started singing. For awhile, it looked like he was going to be the only coach to turn. But his wife, Gwen Stefani, eventually flipped her chair around too.

After the performance, John Legend joked that The Dryes were going to break up Blake and Gwen by making them compete against each other.

Gwen was smitten over the couple’s performance. She told them it’s a dream of hers to sing “Islands in the Stream” with Blake one day.

“I can speak from experience, there’s no better way to duet than if you’re doing it,” Blake joked, prompting Gwen to exclaim “Oh my God!”

“I knew that was coming!” John yelled. “I think you guys gotta pick Gwen just for that.”

Putting all jokes aside, Katelyn asked Blake why he turned his chair for them. He said, “I was in just on Derek’s voice before I even knew that you were a part of it.”

Blake said as someone who is country through and through, he would be honored to coach the duo on their Voice journey.

Gwen went on to praise the couple for having lots of character. She too, said she would be honored to work with them. “…whatever genre you’re in, it doesn’t really matter. At the end of the day we’re trying to figure out, how are we gonna connect you with America?”

After hearing both Blake and Gwen make their respective cases, the Dryes were left with a choice to make. And they chose Team Blake!

Head below to watch the Dryes sing “Islands in the Stream” and see how they landed on Blake’s team. We can’t wait for their next performance!