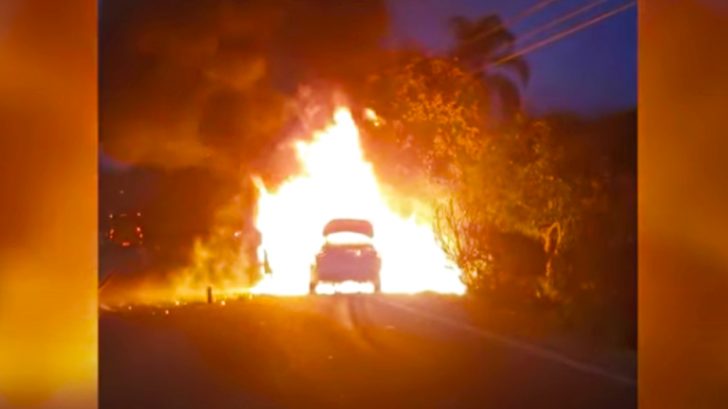 A Camp Pendleton Marine risked his life to save a baby from a burning car in Fallbrook, California.

Gunnery Sergeant Kyle Wetter was driving down Mission Road on Dec. 7 when he noticed that a car had caught fire. Wetter, who is a new father of triplets, instantly felt called to help. In a statement to FOX 5 San Diego, Wetter recalled the accident. He stated:

“From the time it happened to the time the car was fully engulfed was four or five minutes.”

When Wetter reached the scene, the child’s mother was already out of the car. The woman’s husband tried to rescue their eighteen-month-old baby, but the child was trapped under a locked seatbelt. Fortunately, Wetter quickly took action and used a knife to free the baby from the vehicle.

“Seatbelt was locked. The dad wasn’t going to get it out as much as he tried other than taking the baby out of the seat and even at that point, the fuel tank could’ve ruptured on the car,” Wetter revealed in his statement. “There’s just a lot of variables that go into it that you never think about.”

While the North County Fire Department was called to the scene, it is unlikely that first responders would have arrived in time to save the child. Wetter’s heroic actions protected the baby from harm, but the young man remains humble about his good deed. Wetter explained:

“What I would hope is anybody in my situation would help out. We’re all in this together. This life of ours is not just a single person — you’re not in it alone. And that’s what I took away from it. If my wife and my children were in that car, I would hope there was someone like myself that was willing and able to help out.”

Watch the full story in the video below.