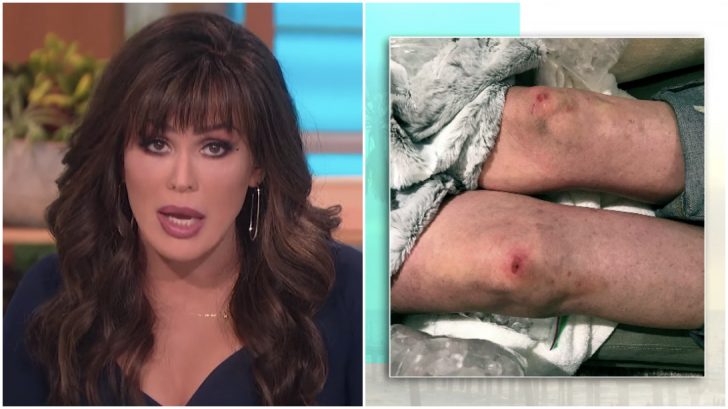 Marie Osmond made her debut as a new host on The Talk Monday. The multi-talented star replaced longtime host Sara Gilbert. During her debut, Osmond opened up about a recent tumble she took on stage while performing with her brother Donny in Las Vegas.

Osmond first shares news of her knee injury on Instagram where she shared a video of her badly bruised knees the morning after she fell.

The show must go on ?

Marie shared exclusive footage of the fall on Monday when she took her seat at The Talk table for the first time. The clip shows the 59-year-old move to take a step forward while singing the Black Eyed Peas’ hit song “I Gotta Feeling.” The star appears to get tripped up on her own boots, causing her to to hit the stage, knees first. As Marie lay on the stage, her brother Donny continued to sing, seemingly unaware of his sister’s misfortune.

Marie explained her brother’s reaction and her own determination to get up and continue singing.

“We have this bet between us, that if anybody ever falls or has an accident, you keep singing. If you don’t keep singing you have to pay the other person 500 bucks. The whole time I’m like, ‘save the microphone.'”

Osmond also shared the sweet gift her brother had delivered to her on the first day of her new job. “And my sweet brother sent me the most beautiful flowers, and I just want to tell him that he sent the most sweet thing and love you, my brother,” Marie said as she fought tears. “I just love him and he’s so supportive and sweet, and it just really touched me.”

Watch the clip of Marie Osmond’s knee-injuring tumble in the video below.