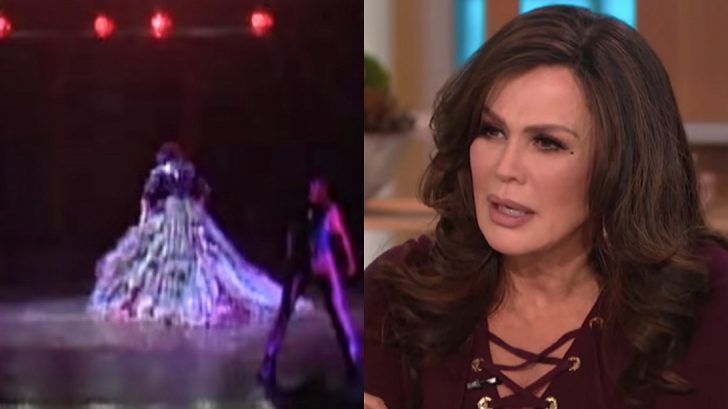 For the second time in as many months, legendary performer Marie Osmond fell and injured her knee while performing on stage at the Flamingo in Las Vegas.

The 60-year-old opened up about the incident on The Talk Monday, saying she “chipped off a piece” of her kneecap when she fell during Thursday’s show (November 7). But, she promises fans that she will be there for the final week of the Las Vegas residency she shares with her brother Donny.

“This is the last week of shows at the Flamingo. And so for those of you that have bought tickets for that last week, I will be there,” Marie promised.

“I’m always okay, and you know, it’s just interesting that [the falls] would be so close together. I’ve never fallen before,” Marie added. “I think maybe the knee was a little bit not as strong. I probably should have been wearing my brace. But as I made that turn my boot stuck on the floor and then I wasn’t able to turn and I just went down.”

A video of the fall shows Marie exiting the stage at the end of a song and tripping forward. She gets back on her feet, but doesn’t move before calling for her brother.

“Can you walk?” Donny asked, to which Marie responded, “No.”

“I did it once before, and I just did it a second time,” she said, as Donny and one of the dancers helped her off stage. “So, what should we do?”

“Well, you go off stage. The first thing we got to do is take care of you, right?” Donny replied.
Marie shared exclusive footage of the fall on The Talk Monday. See it in the video below.