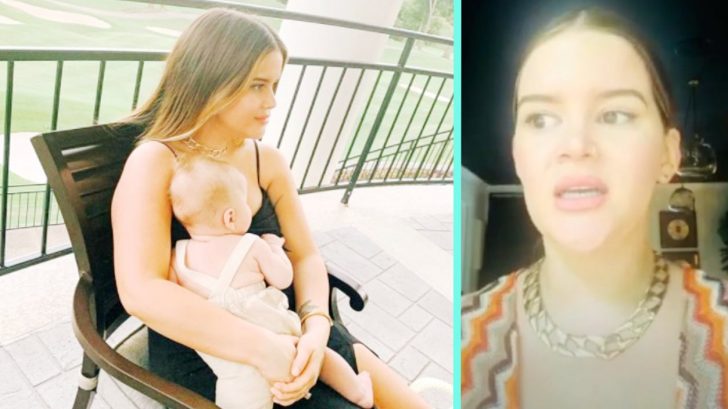 Little Hayes is almost five months old now, and Maren and Ryan are enjoying their lives as new parents.

But things were tough in the beginning as Maren dealt with the “brutal” recovery from her unexpected C-section.

Maren recently filmed a sit-down video for Little Spoon‘s “Is This Normal” series to speak about Hayes’ birth and her postpartum experience. She explained how she intended to give birth to Hayes naturally, put that plan changed.

“I wanted to do it naturally, but I stopped having contractions, and it was just time to call it, and get him out safely,” Maren said.

Because Maren had always intended to give birth to Hayes naturally, she never read up on what a C-section was like and was not prepared for the surgery or its recovery.:

“I didn’t read up on any of that ahead of time, because I didn’t expect to get one,” she said. “So I just wish I had done a better job at preparing myself for the shock of a C-section, because the postpartum of a C-section is so brutal.”

Maren went on to detail how rough her recovery was in the initial weeks after Hayes’ birth. She said even the simple task of getting out of bed was a difficult one:

“I had to like, army crawl to get out of bed to like, use the bathroom in the middle of the night,” she said. “My husband would like, have to lift me out of bed.”

Blue jean baby. Thank you @mirandalambert for this sparkly number. ✨✨✨

Maren said she wishes people talked more about their C-sections because she and many other mothers who go through the experience feel “isolated” and “lonely” after the procedure.

Now being four months postpartum, Maren says she is feeling better and was cleared by her doctor to start exercising again. She ended her video with an encouraging message, telling listeners, “It takes nine months to grow a baby. You need at least that to get back to yourself, so don’t rush it.”

Tune in to the clip below to hear Maren’s full C-section story.

We’re so glad to hear Maren is feeling better now. We salute her for sharing her story, because it’s sure to help many other mothers who will or have gone through the same thing.