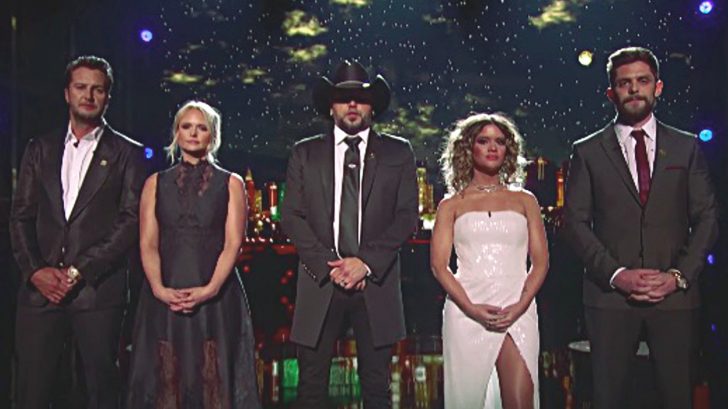 It has been six months since the the Route 91 shooting in Las Vegas, and the memories of that tragic day still weigh heavy on the minds of country fans and artists.

On Sunday (April 15), country’s biggest and brightest stars turned out in Vegas for the 2018 ACM Awards. For many, it was their first time visiting Vegas since the shooting.

The ACM took several steps to honor the lives lost in the tragedy. During the red carpet and the show, artists donned gold pins with the numbers 851, 58, and 1. As Thomas Rhett and other stars explained, the 851 stood for those injured in the shooting, the 58 was in memory of those who were killed, and the 1 was meant to represent the one life that could be saved through educational conversation.

We are thankful to get to be a part of country music. We are thankful we get to live in a country where our voices can be heard. We are hopeful that together we can create a better world for our children. To the many still living with injuries and trauma from that night in Las Vegas, we want to do everything we can to continue to support you-and today we honor you by wearing the number 851. To the fans, road families and family members of those who lost someone-we wear this number today-58-to let you know one thing: we have not forgotten you. We have not forgotten your names. Carrie, Nicol, Steve, Andrea, Denise, Sandy, Chris, so many lost, and so many loved ones still mourning. You are with us not only tonight in Las Vegas as we come together, but every single night in every single town. We love you all, Thomas Rhett and Lauren #fansfirst #vegasstrong

In addition to providing pins for the artists, the ACM opened with a short tribute to those whose lives were lost or affected by the shooting. Route 91 performers Jason Aldean and Maren Morris were joined by Luke Bryan, Miranda Lambert, and Rhett as they spoke of the healing power of music.

As host Reba McEntire had mentioned previously, they didn’t want to make the night too sad by dwelling on the tragedy. Instead, she said they would honor those lost and then work toward having a fun and enjoyable evening.

Other than the opener, Route 91 was brought up again in a highlight reel that showcased stars’ charity efforts following the shooting. The most emotional recognition of the tragedy came from Aldean when he accepted his award for Entertainer of the Year. As the one who was performing when the shooting occurred, Aldean wanted everyone to know he will always remember his “Route 91 people.”

Despite all this, the ACMs came under fire from Rolling Stone in an article released on Monday (April 16). The author wrote that he felt the ACMs “dropped the ball” in honoring the Route 91 victims, and that more could have been done to recognize them.

The article caught the attention of Morris, who went off on social media to express her displeasure. “Honestly, this is so unnecessary,” she started.

She later challenged all critics of the ACMs’ tribute to “ask one of the country music fans who survived that night if they felt the ‘ball was dropped.‘”

Honestly, this is so unnecessary. Artists who want to talk about Vegas HAVE talked about it and everyone just wants to exhale. How about you ask one of the country music fans who survived that night if they felt the “ball was dropped.” Or Jason. I think the ACM’s WERE respectful. https://t.co/rrw5QVsoAV

She followed up with another tweet, recognizing that everyone has a right to their own opinion. However, she said that it isn’t right for critics to “judge a show that’s trying to help everyone move on.”

I get that everyone has an opinion, but if you weren’t there and they aren’t YOUR fans who were taken, maybe don’t judge a show that’s trying to help everyone move on.

There was a great show of support for what Morris had to say. Many Route 91 survivors responded to her, with one writing that she felt the ACM “handled it perfectly.”

As a #Route91 survivor, I thought the ACM’s handled it perfectly. It was respectfully addressed, but not over done. I think about #October1 every day. It was nice to be able to watch an awards show and enjoy the performances without another emotional reminder of that night. ??

You can watch the ACMs’ opening tribute to the Route 91 victims in the clip below.

What do y’all think of all of this? Did the ACM do enough to honor those we lost in the Vegas shooting, or do you think they could have done more?