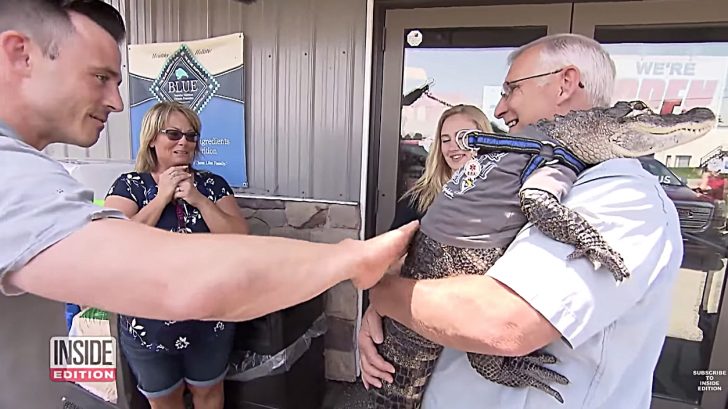 65-year-old Joie Henney from York Haven, Pennsylvania has one of the most unusual emotional support animals (ESA) you’ve ever heard of, a 5-foot-long, 60-pound alligator named Wally.

Joie was diagnosed with depression after three of his closest friends died back-to-back within a short amount of time. Fearing he would never be able to find joy again he started going to a therapist who suggested he get an emotional support animal, but Joie said that cats and dogs are not for him.

One day he traveled down to Orlando, Florida and came across the gator when he was a tiny baby who was about to be killed because he was in an area where people were scared of animals like him. Compassion for the gator swept over Joie and he decided to take him home to Pennsylvania.

Joie continued to go to his therapist who recommended that he get on medicine for his depression but he refused it saying that he hated taking medicine. However, the therapist noticed how happy Joie would get when he talked about going home to play with Wally and eventually decided to approve his gator as his emotional support animal.

“My doctor wanted to put me on depression medicine, and I hate taking medicine. I had Wally, and when I came home and was around him, it was all OK,” he said, according to The Bright. “My doctor knew about Wally and figured it works, so why not?”

Wally goes with him everywhere and people from all over walk up to the couple to ask questions and pet the gator. Joie says he’s bashful and loves to cuddle like a teddy bear and is often seen laying over his owner’s shoulders. According to Joie, Wally has never bitten one person and is even friends with a little goldfish and bullfrogs that he’s supposed to eat.

The gator spends most of his time on the couch watching TV shows like Gator Boys, Swamp People, and The Lion King. He loves to caress and wrestle with Joie and says the gator whacks him with his tail and then smiles at him. Wally will eventually grow 14 to 16 feet long and weigh 900 to 1,100 pounds. He eats chicken wings and has his own 300-gallon plastic pond inside the house that he shares with another small baby alligator that was rescued.

Learn More About Wally And Joie In The Video Below