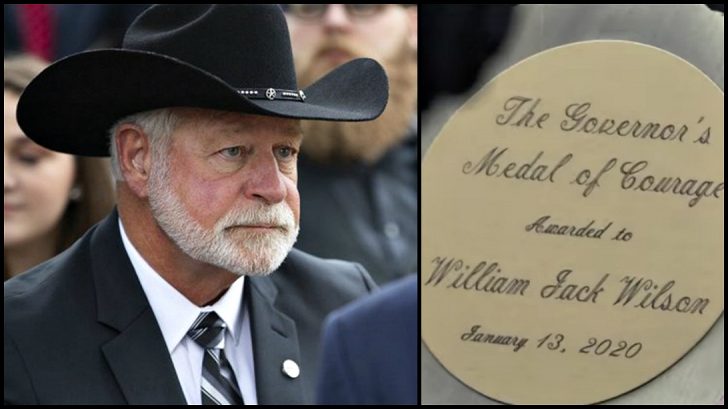 Ricardo B. Brazziell/Austin American-Statesman via AP

Jack Wilson doesn’t consider himself a hero. But, ask anyone who was in attendance at West Freeway Church of Christ in White Settlement, Texas, on December 29 and they will disagree.

Wilson, a firearms instructor and volunteer security officer, shot and killed an armed attacker who opened fire during the church service. While two men in the church were killed by the gunman, there is no doubt in anyone’s mind that 71-year-old Wilson saved many lives that day when he stopped the gunman in his tracks with a single shot.

In an interview with local media, Wilson said that he and other church security guards had their eye on the gunman before the shooting took place because he had entered the sanctuary wearing a “fake beard and fake wig” and was wearing a long coat.

The gunman, Keith Thomas Kinnunen, took a seat near the back of the sanctuary. It’s unclear how long he sat there before standing up and talking to one of the security guards, Richard White, then drew his gun and fired. Both White and Wilson drew their weapons as soon as they saw that Kinnunen had a gun. Within six seconds of Kinnunen firing his first shot, the shooting was over.

Wilson said he couldn’t shoot back right away because people were starting to stand up.

“About a second later had a clear shot, then I took the shot,” Wilson said. “I don’t consider myself a hero at all. I did what I was trained to do.”

On Monday, Texas Governor Greg Abbott presented Wilson with the state’s highest civilian honor, the Governor’s Medal of Courage. The Governor called Wilson a hero in the ceremony that took place in Austin.

“Only God knows who is alive today because of Jack Wilson,” Abbott said. “What we do know is that so many lives were saved because of Jack Wilson’s quick action, his calmness under pressure and, above all else, his courage and his willingness to risk his own life to save the lives of others.”

“When events arise, you’re going to do one of two things. You’re either going to step up and do what’s right or walk away. And I’m not one to walk away,” Wilson said while accepting the medal.

Thank you for your bravery, Mr. Wilson.