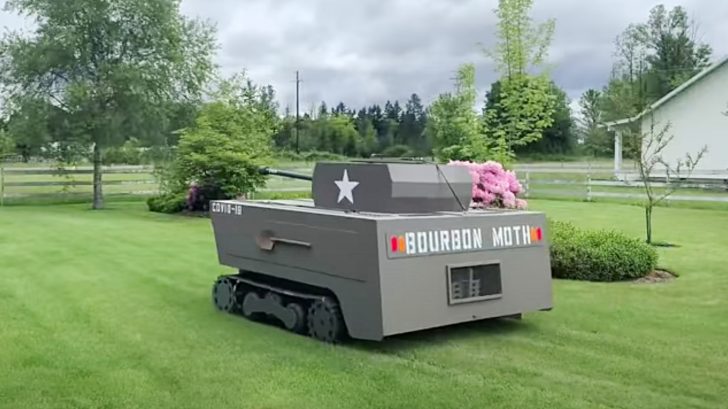 Ever mow your lawn and start daydreaming about how you could kick your mower up a notch? Maybe you’ve thought about a zero-turn mower, or a super quick option, or even a mower that lets you stand as you zip around your yard.

The full tank video is live ???? go click the link in my bio to watch the beast come to life. And PLEASE don’t forget to subscribe…..I mean I built a tank…..I feel like I earned it ??‍♂️

This Oregon man took his lawnmower to the next level, beyond the wildest dreams of most mowing men (and women) – by turning it in a tank that fires spuds.

The Albany, Oregon-based woodworker Jason Hibbs took customizing lawn equipment to the next level and titled his creation the Bourbon Moth, named after his woodworking company.

This project is really staying on track.

While the idea is impressive on its own, the video posted by the tank creator’s woodworking company shows the incredible detail he put into the tank, from the 2x4s that make up the interior skeleton to the plywood panels that create the rugged, tough look of the exterior of the tank.

Little by little the beast starts to take shape. #notyourgrandpaslawnmower

In the video, viewers can see that the “tank” doesn’t just look tough. It’s sturdy enough to drive straight through a fence, no worse for the wear.

This tank isn’t just good for running down fences. The fully operational cannon shoots off potatoes with a speed that could knock anyone off their feet in one quick shot.

Check out the full video of the construction and working final product of the tank below!