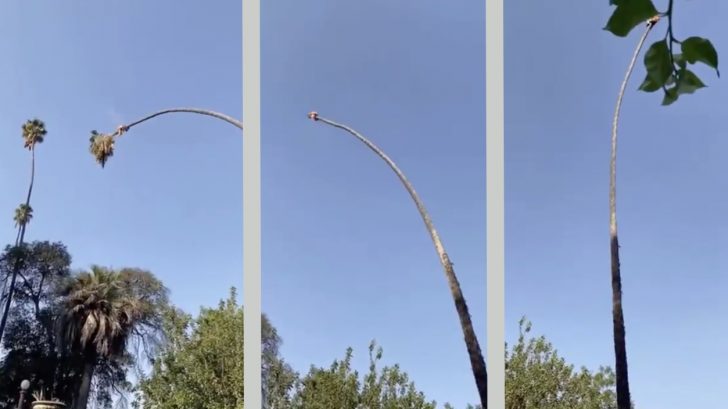 One of the craziest videos to come out of 2020 recently is from a former American basketballer named Rex Chapman living in San Bernadino, California. Rex was outside watching an arborist (a professional tree trimmer) trim a tree in his neighborhood when he caught an incredible moment on camera.

The arborist climbed what appeared to be a 30 or 40-foot tall palm tree that had leaned over too far causing a potentially dangerous hazard. The top of the tree had become so heavy that it had the tree laying horizontal.

As the man held onto the tree with one hand and onto a saw with the other, he proceeded to cut off the top of the tree. What Rex captured on video next would leave millions of people stunned. The top of the tree broke off and the rest of the tree went swinging back like a weeble wobble toy.

The arborist held on for dear life as the tree swung back and forth. The guys on the ground gasped for air in disbelief at what they were witnessing. It shocked them at first but that quickly turned into excitement and they screamed and cheered for the man.

Ever seen anyone cut a really tall palm tree?