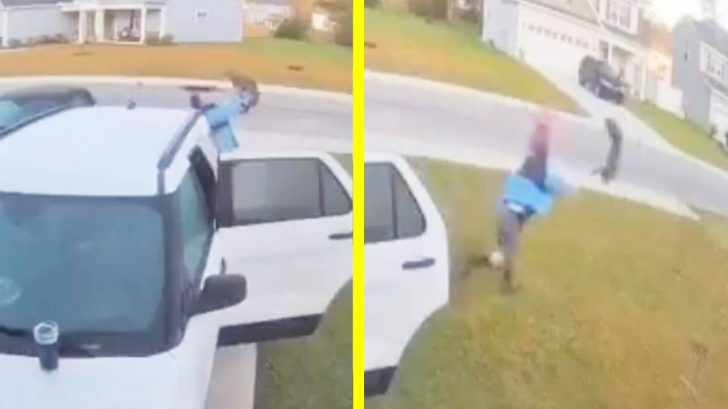 A Twitter video posted on April 15 with the caption, “This was a wild 46 seconds,” has garnered over seven million views in less than 24 hours.

A man was getting ready for his day when he had to jump into hero mode. He was getting into his car, placed his coffee on the hood of his vehicle, and even said “Good morning” to his neighbor who was jogging by.

Then, his wife came out holding a kennel and all hell broke loose. She started screaming after something started attacking her. In the video on Twitter, we couldn’t really see what was near her, but you can hear a loud growl.

Her husband ran over to help and all of a sudden he emerged from behind the cars with a cat-like creature. Once he had the cat above his head, he screamed “Oh my God, it’s a bobcat!”

He held the bobcat above his head for a few more seconds, likely thinking about what he would do next, and then threw it across his front lawn.

The neighbor jogging by can be seen running back to help while the man yelled at the bobcat “Go! Get!” over and over.

The bobcat ran back towards his house, and his wife, and the man yelled for his wife to watch out.

“It’s a bobcat, it attacked my wife!” he told the jogging neighbor, who was in disbelief – probably because she tried to run it off, too!

Watch it all go down in the video below.

This was a wild 46 seconds pic.twitter.com/jIHQg0G4qU