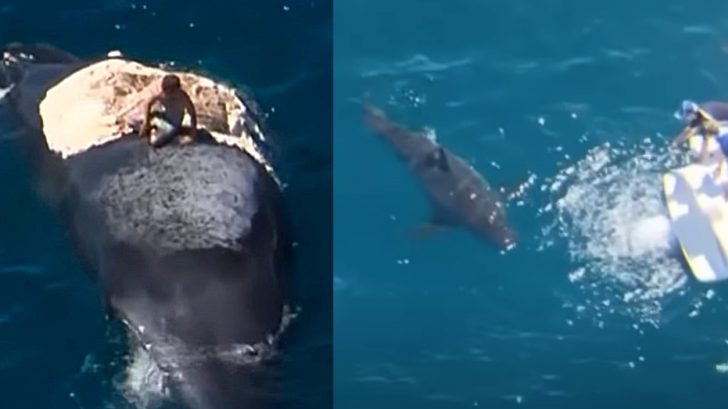 Back in November of 2014, Harrison Williams was seen on video jumping off a boat in the middle of the ocean and climbing on the back of a dead whale floating in the ocean with sharks feasting on it.

At the time, the 26-year-old Australian man said he was on a boating excursion with friends off the coast of Western Australia when they spotted the massive partially-eaten whale.

“Out on the boat with the boys and one of my mates thought it’d be pretty funny if I surfed the whale, so I just did it,” Harrison told CNN affiliate Seven Network.

The video showed the man jumping from the boat and swimming out towards the whale carcass. Once he got to it, he climbed up an area where it looked like the sharks had been feasting at one point but the whale must have gotten flipped over by the waves.

After climbing on top of the whale, his friends see a massive great white shark, along with several tiger sharks, swimming around the whale feasting on its flesh.

Their laughter quickly turns to fear and his friends start screaming to Harrison “Hazza! There’s sharks there! Come back!”

Harrison later admitted that he had seen the sharks before he jumped into the water but that didn’t stop him from making his way to the whale carcass.

“He was too busy chomping on the whale so wasn’t too bad,” he said, according to CNN. “But not everyone was impressed. Mum thinks I’m an idiot, Dad’s not too proud either.”

The Department of Fisheries also saw the video and said that his risky behavior was irresponsible. However, because the whale was dead and Harrison didn’t remove any parts of it, he won’t be charged or fined for his actions.

Days later, the whale carcass ended up washing up on a beach at Scarborough, a suburb of the city of Perth, drawing many sharks to it. So many in fact that authorities said they had to close the beach until shark sightings eventually stopped.

When asked if Harrison would ever do what he did again, he replied, “I’ve done it. Don’t need to do it again. Pretty grateful to still be alive.”

Watch The Man Jumping On Whale Video Below