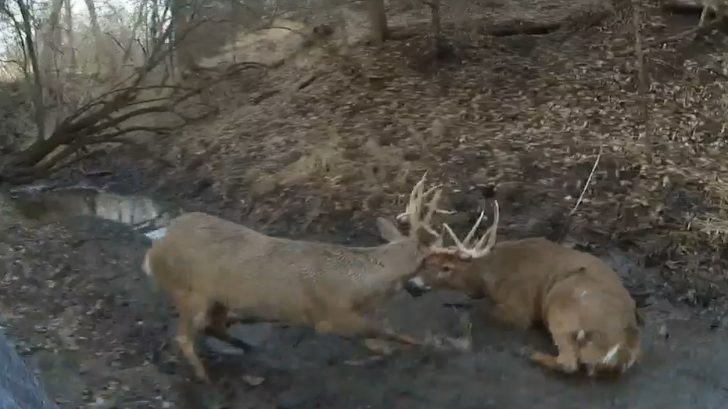 According to Kansas Wildlife, Parks and Tourism, a bow hunter reported spotting two whitetail deer in an “unfortunate entanglement” with having their antlers locked together and they were desperately trying to free themselves.

It happened in Jackson County in January 2021 and when the hunter found the deer he notified the game warden and they both began tracking them.

“At the time, the wardens didn’t know how long the bucks had been struggling to free themselves, but quickly observed that the deer had enough energy and wariness remaining to make approaching them difficult and potentially dangerous,” officials told The Kansas City Star.

Even though they knew the dangers of trying to free them, the men were determined to save them. With a body cam on Game Warden Jeff Clouser, he captured video of him creeping close enough to throw a blanket over the deers eyes to temporarily blind them into calming down.

It worked. The deer became still and stopped moving and Jeff sensed that this was time to do what he had to do to free them. He pulled out his pistol and aimed it directly at the spot on their antlers that was locking the bucks together and blasted off a shot. The bullet broke the antlers apart and the bucks took off running in different directions.

“We have had several of our game wardens shoot the antlers to break them apart when they can’t free themselves,” Kansas Wildlife, Parks and Tourism Capt. Larry Hastings told The Kansas City Star.

Watch The Footage Below