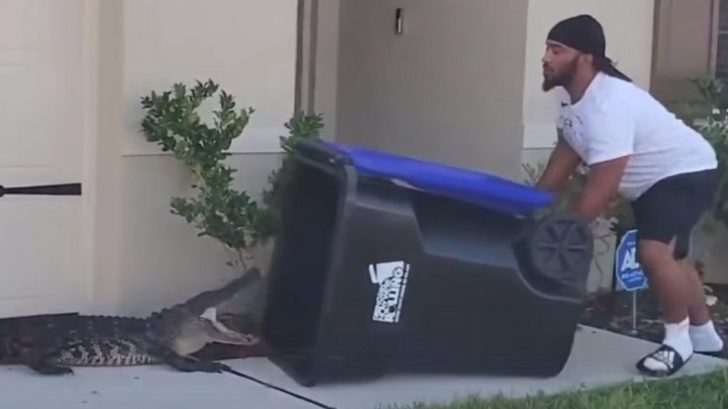 Alligators are everywhere in Florida. Encounters with such an animal are frequent and the list of stories on how men trick alligators to escape harmful attacks can be long.

Yet, the story of how Eugene Bozzi a father of 7-daughters protected his family and neighbors from a fierce alligator is worth sharing. His trick was a trash bin…

As Eugene discovered the alligator in his front yard, he stayed calm and quickly thought of how he can get him out of his property safely. He took a trash bin and forced the alligator inside of it with the guidance of the man filming him. Such an operation was risky. He could have hurt himself or even worse, getting bites from the reptile.

After trapping the alligator in the trash can, he decided to take him to the closest pond and release him to his home.

Eugene is a veteran who served in Afghanistan. His previous military training probably helped him to come up with such a solution.

“To be under pressure, to not panic, and approach the situation and to finish the task and eliminate the threat so you can make the environment around you safe.

That’s kind of what I did in Afghanistan with my other veterans, and I’m proud that I served this country.” Eugene said, according to Yahoo!.

Fortunately, both Eugene and the alligator went back to their homes safely with no trouble.

If you see an alligator next to your home, the best is to get everyone inside and leave the alligator alone. Call an alligator trapper who will come and move him from your property.