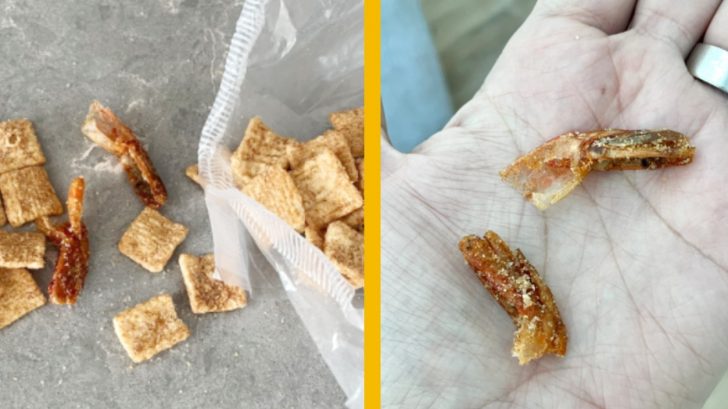 On Monday, comedian Jensen Karp sent the internet into a frenzy when he revealed that he found two shrimp tails inside a box of Cinnamon Toast Crunch.

Karp, who is married to Boy Meets World star Danielle Fishel, tweeted his find alongside a picture of the shrimp tails, which appeared to be covered in cinnamon and sugar. He wrote:

“Ummmm @CTCSquares – why are there shrimp tails in my cereal? (This is not a bit).”

Ummmm @CTCSquares – why are there shrimp tails in my cereal? (This is not a bit) pic.twitter.com/tTjiAdrnVp

An hour after Karp tweeted the photo, the popular breakfast cereal’s official Twitter account responded with promises to “take a close look.” Shortly after, Cinnamon Toast Crunch assured followers that the objects Karp found in his cereal were “an accumulation of cinnamon sugar.” They stated:

“After further investigation with our team that closely examined the image, it appears to be an accumulation of the cinnamon sugar that sometimes can occur when ingredients aren’t thoroughly blended.”

It’s safe to say that Karp was less than thrilled with the Cinnamon Toast Crunch’s response. The comedian posted a closer look at the mysterious objects and revealed that he was not upset about the situation until the company “tried to gaslight” him.

Ok, we’ll after further investigation with my eyes, these are cinnamon coated SHRIMP TAILS, you weirdos. I wasn’t all that mad until you now tried to gaslight me? https://t.co/7DmADmoqUt pic.twitter.com/rSLE60pvoy

Since the company tried to write off the incident, Karp has embarked on a mission to prove that the cereal objects were indeed shrimp tails. Currently, the alledged shellfish pieces are in a lab for confirmation. The comedian also went through the entire bag of Cinnamon Toast Crunch and shared his findings online.

I was convinced to go back through the bag, since when I first noticed the shrimp tails, I freaked out and closed the box. Here’s all my findings, which also now includes a weird little string? pic.twitter.com/mRDUhqG3I8

Later, Karp confessed that some of his discoveries included “black things” inside the bag, and he was referred to pest control for further investigation. The comedian also stated that his original purpose was to inform the cereal company of the cross-contamination for people with shellfish allergies and kosher diets.

For more on the Cinnamon Toast Crunch saga, check out the video below.