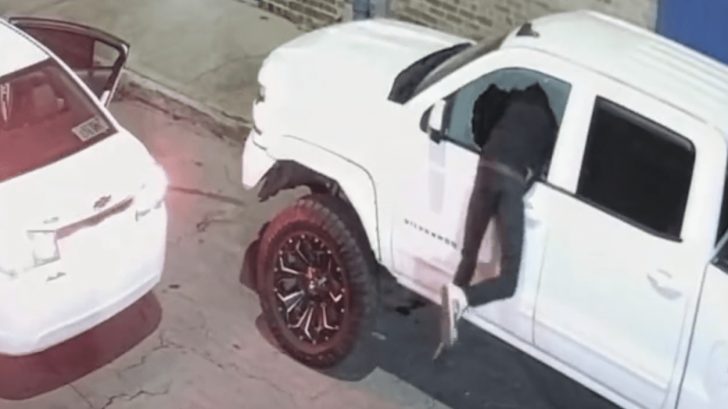 The New Orleans Police Department is now urging all residents to not to take matters into their own hands after a video was released of a burglar getting hit with a flashbang grenade after they tried stealing the truck.

The incident took place in the suburb of Metairie and the owner of the truck said that thieves have tried seven other times in the past couple of months to break into his truck and steal it.

The man said he was tired of the burglar’s vandalizing his vehicle so he took matters into his own hands and rigged it with a flashbang grenade.

The plan apparently worked as surveillance video showed a car pull up beside the truck and a man jumped out to smash the driver’s side window before climbing inside to see what he could steal.

However, what he found was a flashbang that scare the holy heck out of him. The flashbang was hidden in the center console and when it went off, the guy freaked out and took off running back to his car as fast as he could.

“I don’t want this guy to die for what he did, but I don’t want him to just be able to smash and grab and run away…” the truck owner, who wishes to remain anonymous said, according to FOX. “He probably didn’t get hurt that bad, but it wasn’t pleasant and it might deter him and his friends and tell other people not to do this too because, without something like this, there is no consequence because they’re not going to get arrested.”

The New Orleans Police Department released a public statement advising residents against rigging explosives to their cars because doing that makes the vehicle a bomb, and illegal.

The department said, “While we understand the frustrations our citizens have with crime, rigging an explosive device to detonate inside a vehicle is illegal and a bad idea. Not only is there a risk of injury to yourself and others, there could be serious legal ramifications for everyone involved. Please call your District station or Crimestoppers to report illegal activity.”

According to the truck owner, the city leaders have failed in preventing crimes and are not doing very much about it to stop the thieves.

“Leadership has failed and more ways than one when it comes to this situation, just crime in the area, like, I reported to the police almost every time and I don’t blame the police for this, they’re understaffed and like there’s too much crime. I really blame the fact that like these, these people get caught, and then they basically get bailed out. Whoever did this, definitely, had a bad night. He might never do it again because every time he goes in there, this could happen to him.”

Watch The Flash Bang Video Below

Wild video: NOPD urges residents not to take matters into their own hands after video shows a man who rigged a flash bang in his truck to deter car burglars >> https://t.co/kw4E9OtRib pic.twitter.com/aS05UX6cY2