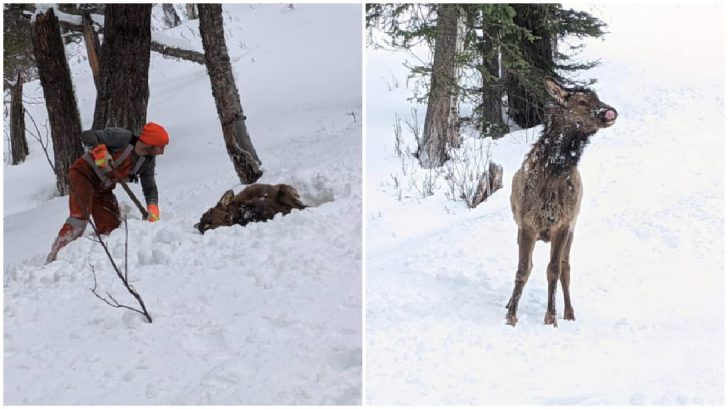 Snow covered mountains are one of the most beautiful sights to behold. But, their treacherous terrain, frigid temperatures and heavy snowfall can also pose a dangerous threat to humans and wildlife. One lucky elk in British Columbia almost fell victim to one of the mountains’ most dangerous happenings, but was rescued by a man who was in the right place at the right time.

Jesse Dahlberg was watching railroad crews set off intentional avalanches at Mount Dennis in southeast British Columbia when he spotted an elk in the path of the triggered avalanche.

“I didn’t know how big the avalanche was going to be so I was hoping for the best, and when I saw it … I thought there’s no way that elk is going to survive,” said Dahlberg. “That wall of snow caught up to that elk so fast and just blasted it.”

After the avalanche had settled, Dahlberg and a friend made their way to the place where they last saw the elk. Much to the men’s surprise, they spotted the elk peeking out from the snow.

“I could tell it was alive. It was looking at me, I could see its nose moving. It couldn’t move, it was in that snow like concrete,” Dahlberg said. “It was alive and I wanted to save it.”

Dahlberg began to remove the snow around the elk with his hands before his friend brought him a shovel. After about 15 minutes of digging, the elk was freed. The men said that the elk walked a few feet before turning to look at them. The elk stood still and watched the men walk away.

Jesse Dahlberg shared video of the avalanche and photos of the rescue on social media where he garnered a great deal of praise for his heroic rescue. (WARNING: Strong language)

I had a pretty exciting day today. Took this video of an elk being hit by an avalanche. I think she appreciated me and Patrick Sengers digging her out.

Avalanche control is a common practice in mountainous regions. Often intentional avalanches are triggered by blasts when heavy snowfall and unexpected avalanches are a threat to human life, roadways, buildings, and more. In this situation, the snowfall posed a threat to railways and the elk happened to be in the wrong place a the wrong time.