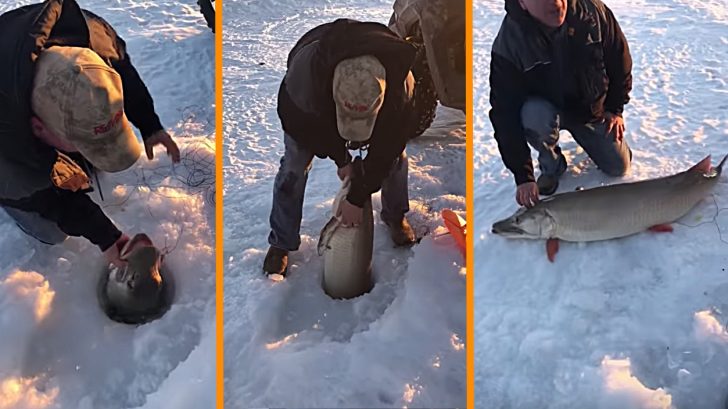 Mark Kottke from Minnesota is an ice fisherman and was out fishing for pike on Mille Lacs Lake on (Feb. 22). Mark reeled in a muskie through a 10-inch hole in the ice that almost broke the state record.

The fish weighed 50-pounds, had a 27-inch girth and was 54-inches long. Mark’s neighbor Jason Birke pulled out his camera and started filming as the fish was being pulled up. It was an exciting moment to watch such a big fish come through such a small hole. Jason even said while Mark was trying to pull it up that it wasn’t going to fit and was in awe when he saw it squeeze through.

“This was the biggest fish I’d ever seen caught and is only a few inches from the state record,” Jason told USA Today. “Truly amazing to witness in person.”

The standing Minnesota state record for a muskie was caught in 1957 at Lake Winnibigoshish and that fish weighed 54 pounds and was 56 inches long. So Mark was only a couple of inches away from equaling that fish and any more inches more than that he would have set a new record for the state.

As the fish reached the opening of the hole, Mark used his hands to pull the fish from the water through the hole and out onto the ice. He wasn’t allowed to keep the fish because it’s not the season for that so he quickly measured it, took a picture with it and released it back into the water within 1.5 minutes.

Watch The Fish Come Through The 10-Inch Hole Below