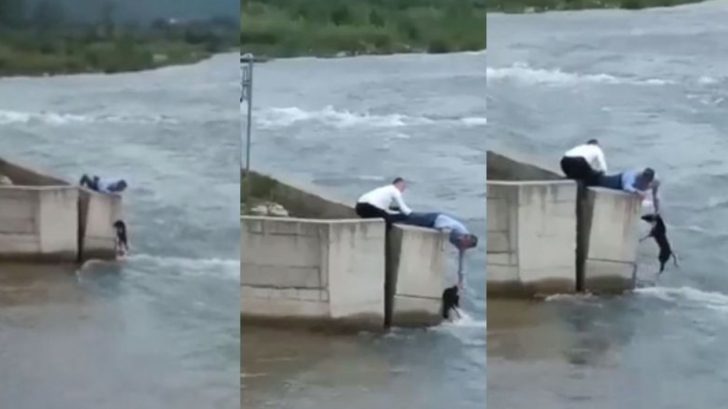 A man celebrating a wedding was captured on video rescuing a dog that had fallen into a rushing river and was stuck up against a concrete wall.

The dog was stressed and needed some help and so the man walked over to it investigating the situation and trying to figure out how he was going to help this poor pup.

The incident was said to have taken place near the Lim River which flows through Montenegro.

The video shows the guy who was fully decked out in a two-piece suit, preparing himself by taking off his blazer by walking over to a fence to hang it on it.

As he made his way back to the dog, the fast water rapids continued to barrel along and put the dog’s life at risk. The man dropped down to his belly trying to reach the animal that was just a few feet down from where he was laying.

The dog then looked up at him as he reached his hand down to it, finally realizing that there was someone there and he started petting the dog to calm the animal down. The pup was actually too far out of reach for him to rescue on his own and that’s when another man walked over to assist.

The second man holds onto the first man’s legs as he leans have of his body over the wall in an attempt to reach the struggling dog. It was working, the man could finally reach the dog and he grabbed it by one of its legs and began to lift it up.

He could only lift the dog so high but that’s when the other man stepped in and reached down to finish pulling the dog all the way up out of its predicament. They threw the pup onto dry land where it shook its coat of fur to dry off and the men celebrated their victory.

Watch The Happy Ending Below