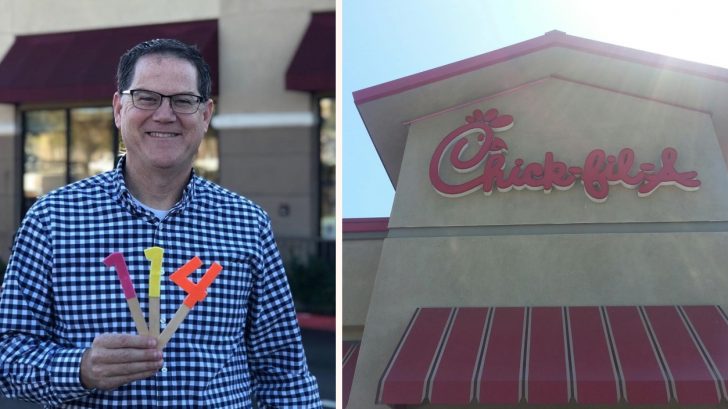 Mark Mendenhall from San Diego, California is competing for the title of eating Chick-fil-A for the most consecutive days in a row and he might just win.

Congratulations to Mark Mendenhall, nicknamed “Mayor of Chick-fil-A”. Mark has set a record for eating at Chick-fil-A…

According to the Fox News report, he’s been named the “Mayor of Chick-fil-A” by the employees of his local franchise and been eating there every day for the past few months. He said he decided to start this goal because he heard about a guy in Georgia who did it for 100 days straight and thought to himself, “I can do that.”

“I thought to myself, ‘Huh, well, I could do that.’ So, I decided to start my challenge the very next day,” Mark told Fox News. “But I told myself that I would go 105 days just to be different.”

Chick-fil-A has not confirmed if they have an official record for someone eating their food for the most days in a row but that’s not stopping Mark. Four months into it he has already surpassed the guy from Georgia by eating 114 days in a row.

Posted by The San Diego Union-Tribune on Monday, December 16, 2019

His wife, however, is not happy about it due to it getting in the way of family time. They were apparently on a family trip to Disneyland and he had to leave for lunch to drive all the way to Chick-fil-A and since then has promised his wife that he’d not do that on the next family vacation.

As for his favorite sanwich he says, “My favorite thing on the menu is the original chicken sandwich, fries and a large Diet Coke,” he tells Fox News. “I would always get a large diet coke with extra ice.  The team members always knew that.”