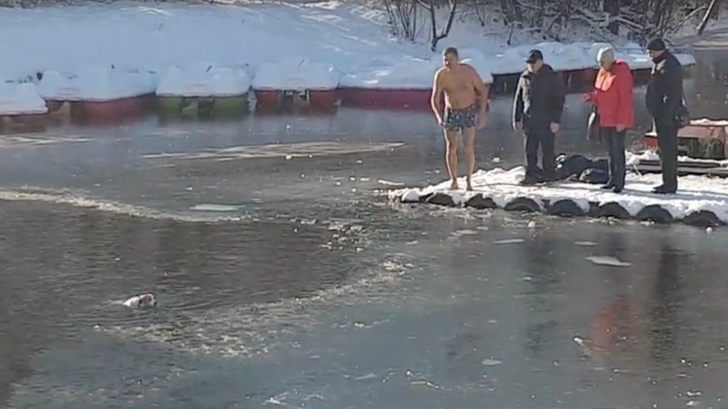 A good samaritan from Simferopol, Crimea bravely jumped into freezing water to save someone’s dog that was stuck in the middle of Gagarin pond.

It happened on December 17th, 2016, in a town in southern Ukraine. The dog was on a walk with his owner when he stepped out onto thin ice and fell into the pond. Several onlookers tried to get the pup to swim to them but was blocked by the ice and couldn’t make it.

That’s when the good samaritan standing on a dock stripped down to his boxers and pushed the ice away before getting in. He dipped down into the water and swam towards the dog. You could tell it was cold because the guy was moving quickly, not wasting any time.

The guy pushed the dog in the direction of the shore as he swam behind him. Eventually, they reached land and he grabbed the dog and carried him up a snowy embankment where he slipped and fell.

The dog got up and started walking towards his owners shaking off the water and an onlooker reached down to give the guy a hand up. The hero then walked barefooted on the snow back to his clothes on the dock.

Watch The Rescue In The Video Below

A dog was desperately trying to get out of the water, but the slippery ice made it too hard. The man saw the animal sinking, took off his clothes and jumped into the cold water of the pond Gagarin to save the dog.Credit: ViralHog