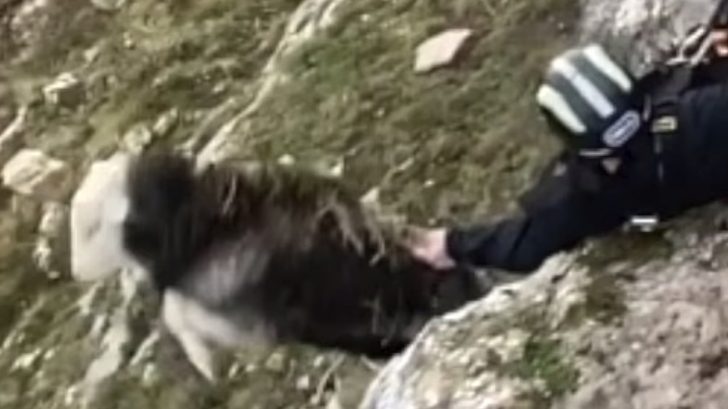 RSPCA rescue workers Dean Wilkins and Mike Pugh were hailed as heroes of North Wales after saving a sheep from plunging to its death when it got stuck on the side of a cliff.

Video footage showed Dean and Mike strapped up in harnesses, rope, and safety gear as they repelled 90 feet down the side of the cliff to get to the animal.

It was said the sheep was initially scared by a dog and that’s why she jumped off the cliff in the first place. Fortunately, she did not plunge to her death and was able to catch herself on a ledge about 90 feet down.

She almost died again when Dean finally got down there to her and placed one hand on her back. She tried jumping away from him but he grabbed onto her and for a moment, they dangled high in the air until Mike got down to help.

Dermot Murphy, RSPCA chief inspectorate officer told BBC, “There is no doubt that Dean’s quick reactions and strength saved the life of this sheep. She would have plunged down the cliff if he hadn’t managed to grab hold of her and hang on until his colleague arrived. I’m incredibly proud of Dean and Mike, they are a great example of our rescue team who will go to great lengths to save animals.”

Mike said, “Once Dean had got hold of her and she became airborne, the pressure was then on me to get to them as quickly as possible. This resulted in me unceremoniously dangling upside down in mid air with the sheep on top of me. I recall saying to him with a big grin, Dean, you can let go now, you’re a hero!”

Once they had the sheep in their hands, Dean and Mike slowly and safely repelled down the rest of the mountain and get her back on the ground where her relieved owner was waiting for her. The farmer did a quick health check on her and she appeared to be fine now that she was reunited with the rest of her flock.

RSPCA said they responded to a similar incident last month in Derbyshire and are asking the locals who are pet owners to ensure their dogs are always on a leash when they’re around livestock.

Watch Footage Of The Rescue Below