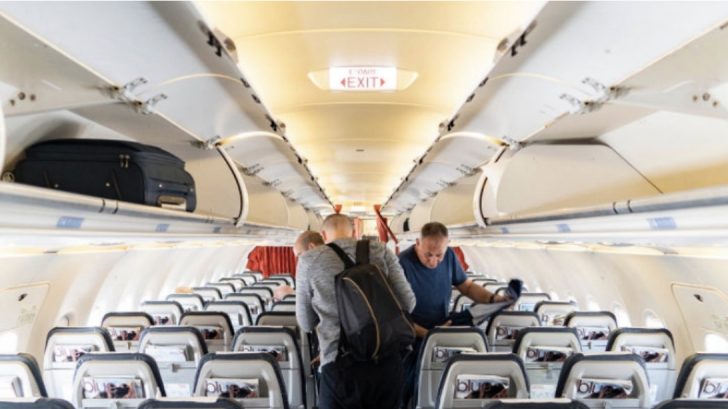 We would probably all agree that servicemen and women don’t get the recognition they deserve, so we should take every opportunity to express our thanks whenever and wherever we can. That is exactly what one airline passenger did two years ago when he was given the chance to make the day of a traveling soldier.

The moment was witnessed by a fellow traveler named Jessica Titus. While boarding an airplane behind a woman in an Army uniform, Titus saw a man in first-class get out of his seat and apologize to the soldier for having her seat. The stunned woman replied that no…she was in seat 31B. The man then walked away and took the soldier’s seat in coach, leaving the soldier with his first-class seat.

Titus attempted to show her appreciation to the unnamed man who gave up his seat for the soldier. She delivered a note and some cash to the man via the flight attendant. But, as you might expect, the kind gentleman refused her offer.

“Seat 31 B — Please accept a drink or snack on me. If everyone treated people the way you treated the service-woman, the world would be a better place,” the note read.

"On my flight Tuesday, I walked down the jetway behind a woman in uniform (Army). A man stood up from his 1st class seat…

The comments on Titus’s Facebook post are full of testimonies from other service men and women and their families who have been on the receiving end of similar acts of kindness .

“This happened to me once…the stewardess came up to me and said a man in first class would like to trade seats with me…I told her to tell him thanks but it wasn’t necessary…she came back and said he insisted…wonder if it was the same guy??,” one reader wrote. Another shared, “We saw this happen when we were on a trip. An older business man gave up his first class to an army guy! We all cheered for him.”

Have you or anyone you know been on the receiving end of an act of appreciation like the one above? If so, tell us about it! And, we challenge you to spread the kindness and show our men and women in uniform how much they are appreciated.