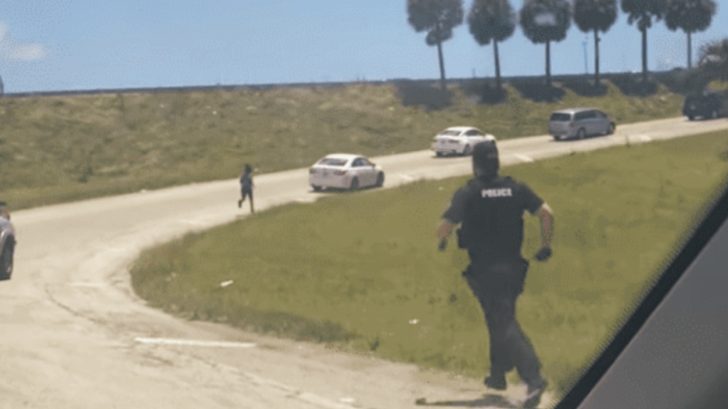 A moment like out of a movie was captured on camera by a person waiting in traffic on a busy exit ramp in Florida. The footage showed a citizen help an officer catch up to a suspect by letting the officer jump onto the back of his pick-up truck.

The witness filming the video said, “This happened on 826, eastbound, on the beaches exit of 441 and 95, not sure who the guy is, but he jumped onto the highway and was trying to hop into people’s cars, ducking down behind cars, and begging to get a ride.”

The crazy footage showed the suspect run past a group of vehicles waiting in traffic on the exit ramp. Moments later, an officer comes running past as well carrying a full belt of equipment and looking a bit out of breath.

He wasn’t on his own though, a guy in a truck pulled out to the side of the road, put on his brake lights, and communicated to the officer to jump in the back of their truck, that they would help get him to the suspect.

“They then started running up the hill, and that’s when we noticed the cop chasing him, the suspect was getting away, and a guy in a pickup truck told the officer to hop in the back, he then pulled up the hill where he stopped, and the officer chased him under the overpass.”

The officer doesn’t waste any time and jumps in the back of the guy’s truck. The helpful citizen quickly but safely drives up the road closer to the suspect who sees what’s going on and decided to run down into the grassy median.

The officer jumps out the back of the truck and begins to chase the suspect again before the video cuts off. According to witnesses, the suspect was apprehended by police, all thanks to the guy in the truck’s help.

“I was later told by someone else who witnessed it but her phone was dead, that the officer did catch up to the suspect and arrested him, they were seen walking back up the hill out of breath.”

According to the witness, they would say this is shocking but to them, this is just a typical Tuesday in Florida.

Watch The Police Chase Video Below