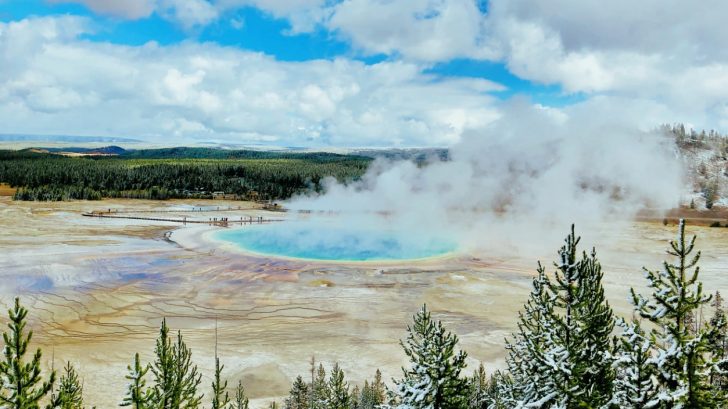 A ranger from Yellowstone National Park responded to a call on August 7th about a group of people hiking towards the Shoshone Geyser Basin with cooking pots.

The ranger quickly went to investigate the matter and found two whole chickens in burlap sacks submerged in a hot spring along with cooking pots nearby. The ranger also discovered a group of 10 people from Idaho who the items belonged to and cited three of them for foot travel in a thermal area.

One of them was ordered to appear in Mammoth Hot Springs court on Sept. 10 where he pleaded guilty to the citation, in addition to other charges for violating closures and use limits. He was fined $600 for each charge and ordered to serve two years of unsupervised probation where he will be banned from visiting Yellowstone National Park during his probation.

What’s the difference between a hot spring and a geyser? Plumbing! Unlike geysers, hot springs (such as Sapphire Pool)…

The incident is not the first of its kind. In 2001, a Seattle TV host and producer got in trouble for digging a hole in the ground at the park to show that the earth’s natural heat could cook a chicken. The show got fined $150 and put on a two-year probation order for disturbing mineral deposits and stepping off trails near steaming geysers. The lesson in both of these situations: don’t try to cook chicken at Yellowstone Nation Park.