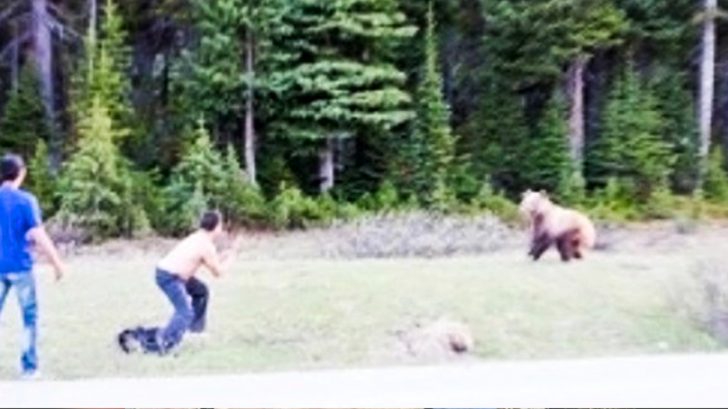 In 2015, two photographers were observing and taking photos of grizzly bears grazing in the Banff National Park grass.

That’s when things went from normal to nutty.

35-year-old Devin Mitsuing emerged from his vehicle shirtless and immediately started shouting at the grizzlies. Not only was he screaming, he can be seen in what witnesses have described a “boxing stance,” with both fists up, as though he was ready to fight the bear.

AirdrieTODAY reports that after raising his fists, Mitsuing charged the bear. The two photographers caught the incident on camera, and the photos have been used in court, since Mitsuing was charged for disturbing wildlife in a national park under Canada’s National Parks Act.

In the four years since the incident, Mitsuing has missed two court dates, culminating in September 13th’s final date. The judge found him guilty and fined him $4,000. Mitsuing apparently was at the court house before the doors opened, but left to run errands and get food, so he missed the trial once again.

The Park Warden who located him back in 2015 and one of the photographers who was there that day were called to the stand. The photographer, Thomas Murray O’Neill, and his friend had been snapping photos for approximately an hour before seeing a red truck with a Saskatchewan license pull up.

O’Neill said, “We were on the other side of the highway when a truck pulled up and two gentlemen got out, started yelling at the bear and throwing rocks … then he took off his shirt and got in a boxing stance.”

Park Warden Paul Friesen testified in court that he was working in a different National Park when he was dispatched about a man harassing a grizzly bear in Banff National Park. He found Mitsuing and his friends at a hot spring too intoxicated to drive home. Their vehicle was impounded and they were given a ride to their hotel. At the hotel, Friesen took an audio statement from Mitsuing, which was played in court last week.

Mitsuing said, “I was just trying to get a picture, was just f**king around … I thought it was a brown bear,” before saying he was trying to go golfing.