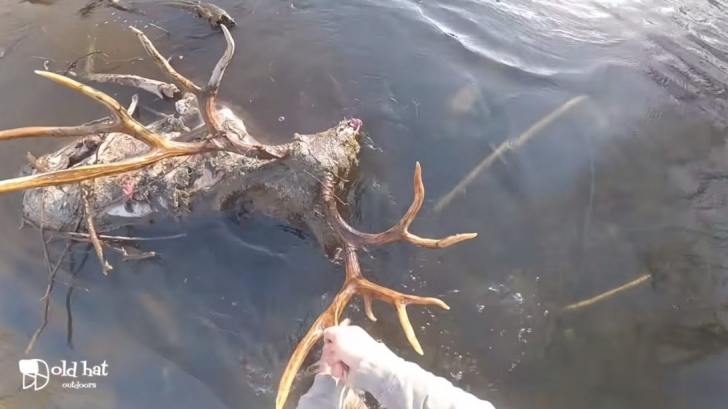 Ice fisherman, fly fisherman, and founder of Old Hat Outdoors, Matt Keller, shared a video on YouTube of an incredible river find while he was fishing on the Boise River.

Matt said he set out that morning to go fishing and was walking through the river when he noticed a deer carcass laying in the middle of the stream.

“My intent was to film a sweet brown trout video,” Keller said. “That didn’t happen. In fact, the fishing sucked.”

As he pulled off some of the sticks that were piled up on the carcass, he investigated the animal to see exactly what it was and wasn’t sure, so he continued to remove the brush.

At first, he thought maybe it was two deer piled up on top of each other but then he realized it was just one massive head of antlers and began to get very excited.

The deer appeared to have been dead so long that its hair had already rotted off but its body was still intact. Matt pulled on the antlers to haul it out of the water so that he could further inspect the beast.

He was certainly impressed by the sheer size of the animal’s antlers and tried to remove them from the head, however, he wasn’t able to fully do it, so he decided to hide the deer instead. He left it on the bank to come back the next day and mess with it.

The next day, he brought his son with him to help pull on the deer and they both carefully sawed the antlers off as they bared through the potent stinky smell.

According to locals, this deer was a local legend.

Matt said that hunters have recorded the big buck on their trail cameras for years trying to track it down. He decided to hang the antlers on his wall. Locals even tried to offer him a large sum of money for the antlers but he turned them all down.

“The trophy has nothing to do with the antlers or skull to us,” Matt commented. “The value was in the experience and we wouldn’t change a thing.”

Watch Footage Of Him Finding The Deer Antlers Below