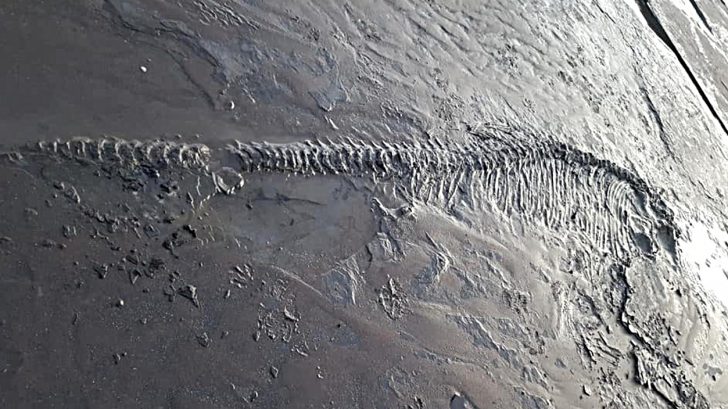 Jon Gopsill, a 54-year-old man says while walking his dogs on Somerset beach in South West England they stumbled upon a fossil of a 65 million-year-old ichthyosaur.

Ichthyosaur made for the Board of Paleontology of the Natural History Museum of San Rafael, Mendoza, Argentina.by Jorge Antonio Gonzalez

Posted by Paleontology on Saturday, July 2, 2016

“We were at the beach when I saw this thing and thought ‘what’s that?’ so I went a bit closer and thought ‘wow,’” Jon told Telegraph. “I thought it was obviously a fossilised sea creature, possibly an ichthyosaur. It doesn’t have a head, I have look[ed] around but I can’t find it. It has been there for at least 65 million years.”

The fossil apparently was unearthed by storms that had recently hit the area and were spotted after his dogs ran over to it and started sniffing it. Brushing the sand and water away he noticed a five-and-a-half foot long bone structure of the ancient marine vertebrate.

History On The Ichthyosaur

According to the University of California-Berkeley post-doctoral research report by Ryosuke Motani, the ichthyosaur was not a dinosaur but begun to appear in the Triassic period. They had their highest population during the Jurassic period and then became extinct during the Cretaceous period which happened millions of years before the dinosaurs were extinct. Somerset beach has been one of the many places these fossils have been found.

“West Somerset’s northern bays are known for their fossil finds,” Telegraph reported. “Part of the lower jaw of a 85-foot ichthyosaur was found in the Somerset village of Lilstock, thought to be 235 to 200 million years old.”

Jon says the find was exciting and he plans to explore the beach more to see what else he can find. In the meantime, he as posted pictures of the ichthyosaur on Facebook which you can take a look at below.