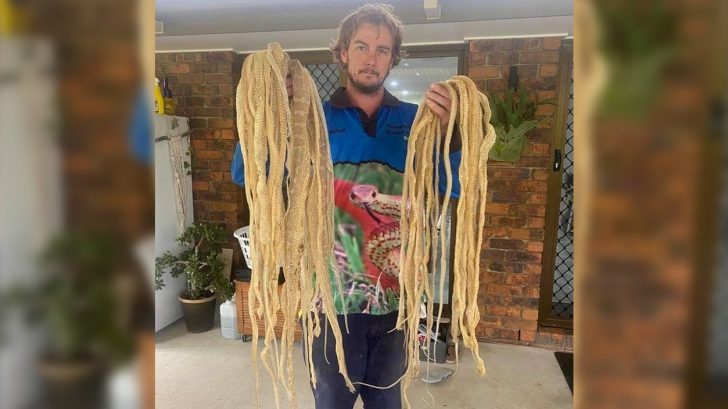 Dave from Sunshine Coast Snake Catchers 24/7 in Queensland, Australia got a bit of a surprise on Wednesday while he was conducting a roof inspection on a resident’s house.

The expert snake handler found over 50 skins from serpents in the homeowner’s ceiling. He posed for a picture with a large bundle of them just to show how many there were.

“He brought down over 30 snake skins out of the family’s roof space, and there was probably another 20 skins up there,” Sunshine Coast Snake Catchers 24/7 wrote on Facebook.

A little boy who lived at the house also took a picture with the skins while smiling from ear to ear and the snake catchers shared that picture as well. The post said the kid loved having Dave around and asked him plenty of questions about the snakes.

As creepy, crawly, and scary as the snake skins look to some people, according to the post, snakes are actually great to have in your roof because they eat rats, mice, and other small rodents.

Snakes usually get in the house through gaps around the doors or cracks in the foundation. They also hid in larger plants so be careful if you plan on bringing plants in and out of the house.

Another way to assist with keeping them out is the fact that they don’t like the smell of smoke, cinnamon, cloves, onions, garlic, or limes. Having oils or sprays around the house containing one of these fragrances will help keep them back, but if you already have one slithering around your ceiling, you can watch the video below to learn how to catch it.

Video Below: How to Catch a Snake in the Attic