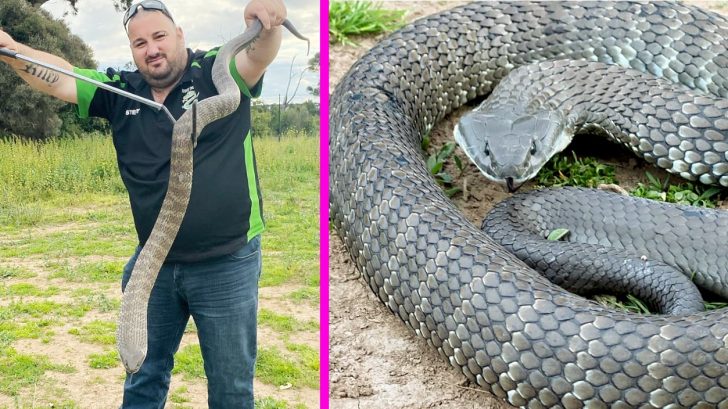 An Australian snake catcher just discovered one of the biggest snakes he has ever seen, and the pictures are wild!

Stewart Gatt, or “Stewy the Snake Catcher” has been working as a snake catcher since 2009. The “About” section of his official Facebook page states that he “will come to your location 24 hours a day, 7 days a week to remove any unwanted snakes or reptiles.”

Gatt then takes the captured animals and releases them back into the wild.

Few calls today as expected due to the lovely sunny day we have had. *eastern brown Keilor East *tiger snake Kings…

While those in the U.S. are just marking the arrival of fall, the seasons are opposite in Australia. Their spring just started, which means the weather is getting warmer and more snakes are slithering about.

It’s a busy time of year for Gatt, who already captured one of the biggest snakes he has seen in years.

Tiger snakes are known for being highly venomous. They are found in the Southern regions of Australia and on its coastal islands, including Tasmania.

The tiger snake that Gatt found was in Melbourne. He shared several photos of it on his Facebook page.

7 News says Gatt told them the snake he caught was with an “even larger female” snake, but that she escaped down a rabbit hole before he could catch her.

“I’m hoping they discover that one again in the next couple of days,” he said.

The male snake Gatt did catch is still one of the largest snakes he has seen in some time. “It was really, really solid,” Gatt said. “That’s probably the biggest tiger snake I’ve found in the last four years.“

The discovery comes in the lead-up to what Gatt describes as a snake “explosion” during this time of year in Australia. He says the warm weather coaxes snakes out of their hiding places as they search for mates and food.

“The snakes are hungry, they’re looking for a partner as it’s breeding season, so that’s why we see an influx,” he said.

Gatt told 7 News that snakes in the city typically don’t get as big as the ones he found. That’s because people usually kill them before they grow to that size.

But Gatt advises people to leave snakes alone. “People get bitten trying to kill snakes,” he said. “If you leave the snake alone and give it plenty of space, the snake will go on its merry way.”

We admit, if we saw a snake as big as the one Gatt captured, we’d give it plenty of space! You can find more photos of the serpent below, along with a video about tiger snakes.

That is one big snake! It makes you wonder how big the escapee female snake was in comparison to it!