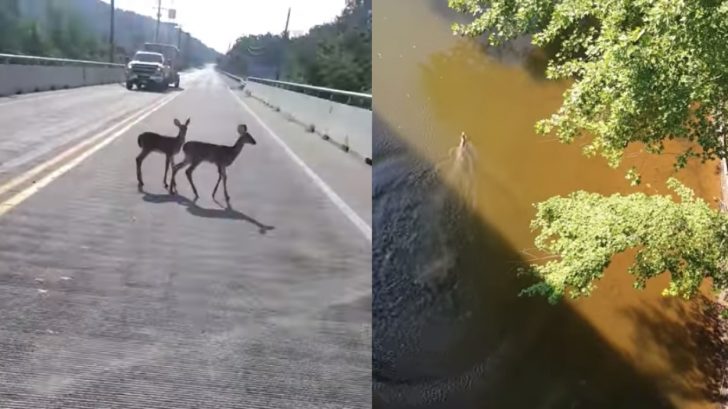 On May 21, 2021, a man posted a video to YouTube showing the wild moment he tried to shoo a couple of deer off a bridge causing one of them to get scared and jump off the bridge.

According to the description of the video, the bridge was at least 30 meters high and there was a flowing river that the deer jumped into below.

The video starts with the man sitting in his truck filming while driving at the same time trying to get a good shot of the two deer standing in the middle of the bridge.

He stops to get out of his vehicle while continuing to film and begins to walk towards the deer. At first, the deer were standing still watching him but as he got closer they began to panic and started looking around for a way to get away.

“What in the world?” he says in the video as he walks towards the deer. “You guys are not supposed to be here. Go on, get your little butts out of here.”

One of the deer tried to run past him but he put his body in the way blocking it from moving forward so the deer did the only thing it could think of to escape–it jumped off the 100ft bridge!

“Oh my God, holy crap!” he says as he looks over the railing to see the deer splash into the water below and start swimming away.