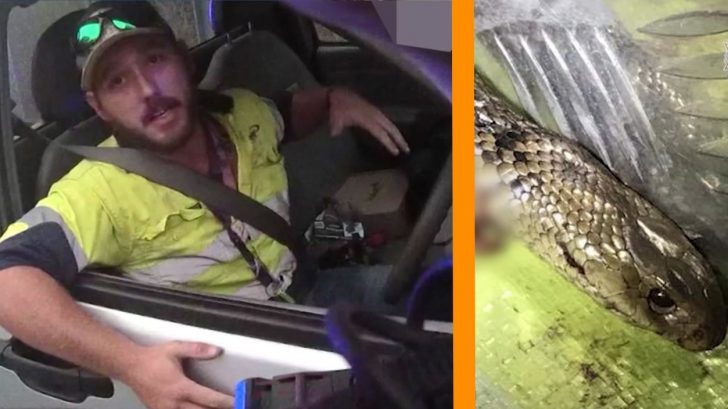 On June 15th, 2020, Jimmy, a 27-year-old from Gladstone, Australia, was driving down Dawson Highway in central Queensland going 100kmph when a highly venomous brown snake crawled out from underneath his truck seat.

He said the snake was big, intimidating, and slithered right up and around his leg then started striking at the seat between his legs. He lost it and completely freaked out!

Jimmy said he used a seat belt and a work knife to fight the snake off while be tried to bring his truck to a stop. He ultimately killed the snake and put it in the back of his truck. Jimmy was speeding to the hospital when a cop pulled him over going 123kmph.

The body cam of the officer showed Jimmy explaining to the officer what happened to him and pointed out that the snake was in the back of his truck. The officer saw the snake and an ambulance was called. Medics ran a health check on him and determined that he had not been bitten by the snake, but instead suffered from a panic attack. “It was pretty bloody terrifying,” he said.

A Gladstone man has fought off a deadly snake while driving at 100km/hr on the Dawson Highway, west of Calliope.Queensland Police: Imagine driving along a regional Queensland highway alone when you spot an angry brown snake slithering towards your leg.With his heart-racing uncontrollably, 27-year-old Gladstone man ‘Jimmy’ experienced just that while driving at 100km/hour on the Dawson Highway west of Calliope around 5pm on June 15.“I’m driving along at 100, and I just started to brake,” Jimmy said.“…And the more I moved my legs… it just started to wrap around me. Its head just started striking at the (driver’s seat) chair, between my legs.”Jimmy used a seat belt and a work knife he had in the ute to fight off the snake off while trying to stop the car.Fearing he had already been bitten and his life was in danger, Jimmy believed he had no other option but to kill the snake and take it with him to hospital.A local road policing officer spotted the utility travelling at 123km/h and quickly intercepted it.Although the traffic officer had heard his fair share of excuses for speeding, he soon realised this was not just another colourful tale and promptly sought medical assistance.Paramedics attended the scene and it was determined that Jimmy had not actually been bitten by the snake but was certainly suffering shock from the ordeal.“It was pretty terrifying, I’ve never been so happy to see red and blue lights,” Jimmy said.www.7NEWS.com.au #7NEWS