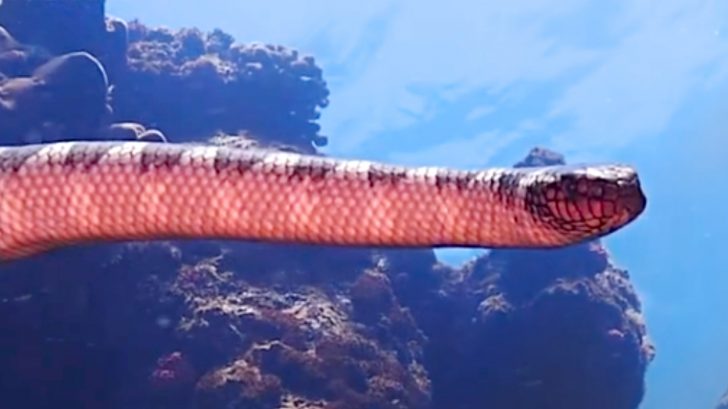 Marcelo Johan Ogata has been documenting his explorations through the deep seas for about ten years, and during a recent dive, Ogata swam with one of the deadliest snakes in the world.

Ogata got up close and personal with a banded sea krait, a sea snake species. The banded sea krait is extremely deadly, with venom ten times more potent than a rattlesnake. Despite their dangerous reputation, kraits prey on eels and will not attack humans unless threatened.

In a statement obtained by ABC 30, Ogata explained that kraits are curious creatures. While the snakes do sometimes touch divers, there is “no reason” to be scared. He stated:

“There is absolutely no reason to be afraid of them, even though they like to touch divers when we least expect it,” Ogata said. “I like getting close to these beautiful creatures to show everyone how harmless these snakes are, just like the biggest sharks out there.”

The banded sea krait, sometimes called the Chinese sea snake, makes its home on coral reefs. Kraits are found in the western Pacific and eastern Indian oceans, and the sea snakes must surface multiple times a day to breathe.

Watch Ogata’s dive with kraits in the video below.